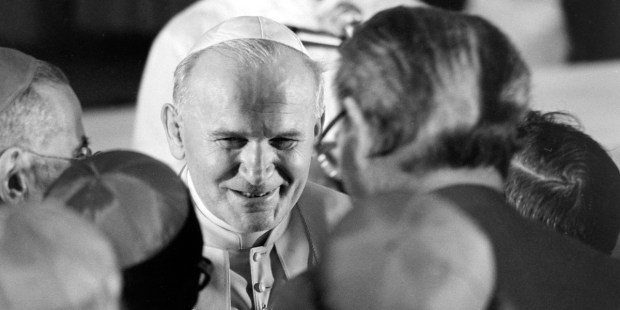 He not only taught it, he lived it out, even as a famous world-traveling pope.

Pope St. John Paul II led an extraordinary life. From his time as a young priest in 1950s Poland surviving the brutalities of Communism to becoming a beloved pope who regularly drew crowds in the hundreds of thousands, he was one of most famous and influential people of his generation.

In the midst of it all, however, he never lost his personal touch. For instance, when he was shot by Mehmet Ali Agca in a 1981 assassination attempt, he later visited the prison to personally forgive the man. He was also well known in his younger days for heading out on retreats with small groups of friends or parishioners deep into the mountains where they had plenty of time for personal bonding.

It’s telling that he was devoted to maintaining individual relationships, even while burdened with the growing responsibilities of serving the Church. I’m just a parish priest with far fewer demands on my attention than he had, but there are nights I’m so tired that I go into my room, close the door, and binge on Netflix. It’s admirable that a man as great as John Paul II managed to make time for personal encounters when it would have been easy to get lost in the busyness and bustle of the Vatican.

The willingness to make time for friendship seems to be waning for many of us. Sure, social media is connective in its own way, but any honest person knows that scrolling through a social media feed isn’t quite the same thing as having face-to-face conversation. This is why many people, when asked, claim to find our technological age dehumanizing.

There are many other factors that pull us way from connecting with others. The way we divide ourselves into “us” and “them” camps so often, especially on social media. Or the way long work days with long commutes zap all of our energies. It’s so easy for many days to go by without any real, human connection.

This is why John Paul II is so fascinating. Because of how smart and busy he was, you would think he’d only have a few close friends or that he would struggle to remain connected to people. But that doesn’t seem to be the case, and people who met him always felt he had given them his full attention. He was clearly intentional in reaching out and made a point of getting to know people. Underneath the genius and in all his many books and teachings, this great man was making one, simple life-changing point: every person deserves to be loved.

In his book Love and Responsibility, he writes, “A person’s rightful due is to be treated as an object of love, not as an object for use.” This holds true for every encounter we have with another person, whether it’s a family member, a co-worker, a friend, a stranger, or an enemy.

The way John Paul II lived his own life is an example of this time and time again. For him, the problem with the rise of technology, politicizing everything, or investing too much time in work is not that they cross some philosophical boundary, but that they objectify people.

To really know a person, we need to pause and take the time to personally connect. The life of St John Paul II shows that a happy life is not about adhering to any ideology or proving ourselves to be right or successful – it’s about people. Every person matters. Every person is valuable. Connection and friendship are the ways we honor that.