What is the difference between a basilica and a cathedral? 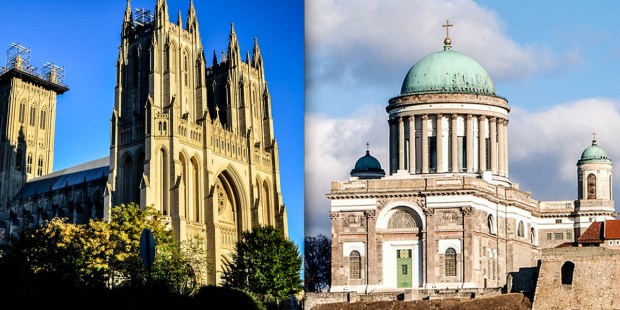 And can a church be both at the same time?

Occasionally, a Catholic in the United States — or elsewhere in the world — will encounter a church building that is not your typical parish church. It is majestic in beauty with a rich history behind it. Sometimes these buildings are called “basilicas,” while other times they are called “cathedrals.”

In the United States there are about 86 basilicas spread throughout the country. Historically, a basilica was just a long rectangular building, quite common in ancient Rome, with a semicircular apse at the top. The apse was traditionally the place where a Roman judge or emperor would sit. In fact, it is called “basilica” for a political reason: in Greek, a basileos is a king. The basilica is, then, the place of the sovereign, where the sovereign sits, speaks and commands.

Christians adapted this style of public building for the place where the sacrifice of the Mass was celebrated, associated to Jesus’ own Kingship. In this way Christ was seen as the true judge and ruler, supplanting the role of the Roman leaders.

As centuries passed, this architectural template was copied throughout the world for countless Roman Catholic churches. Most of the oldest surviving churches in the world were designed in the basilica style.

Over time the pope gave certain churches the canonical “title” of basilica, granting certain privileges and honors to these churches.

Basilicas are further classified into two groups. The first are known as “major basilicas,” and include only those churches in Rome that have great historical significance. These include St. Peter’s, St. John Lateran, St. Mary Major, and St. Paul-Outside-the-Walls.

The second group is known as “minor basilicas.” These are more numerous, found in almost every country in the world. Local bishops petition Rome for one of their churches to be named a minor basilica; the church must be proven to have extraordinary beauty with a rich history behind it to be given the title.

Being named a basilica by the pope brings certain “privileges” to the church, such as “conferring a certain precedence before other churches (not, however, before the cathedral of any locality) … the right of the conopaeum [and] the bell. The conopaeum is a sort of umbrella (also called papilio, sinicchio, etc.), which together with the bell” was used in processions for official occasions.

The name “cathedral” is given to churches that are the “hub” of each diocese, where the bishop typically presides at important liturgies. The cathedral gets its name from the presence of the bishop’s chair, traditionally called the cathedra (Latin word for “chair”). The bishop sits on this chair when celebrating the Mass or other liturgical events at the cathedral, just like the basileos would sit in the basilica.

Often the local cathedral is also the oldest surviving church in the area and, in many cases, has been given the additional title of “basilica.”

In each diocese there is usually only one cathedral, while there can be many basilicas. Today, in dioceses with a very large geographical area, an additional church may be designated as a co-cathedral.

Read more:
How early churches came to be built in the form of a cross

Read more:
What is a diocese?