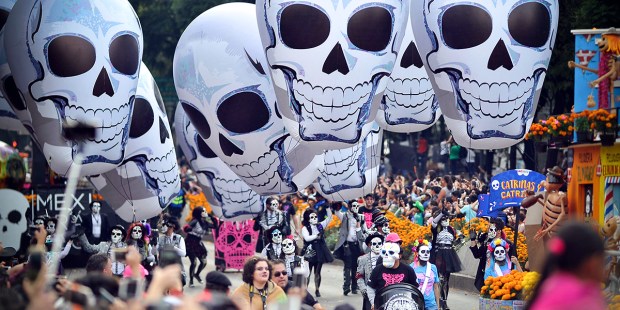 This time of year is especially poignant for loved ones of many natural disaster victims.

The year 2017 might go down as a record-breaker in many ways, with all the hurricanes, earthquakes and wildfires in North America and other natural disasters throughout the world.

Just the hurricanes that tore through the Caribbean, the earthquakes that rattled Mexico and the wildfires that raged throughout California and other parts of the American west claimed 826 lives.

Then there was flooding in India and Nepal that took over 1,000 souls, and hundreds who died from famines and cholera in Africa and the Near East.

On top of that, the Las Vegas shooting killed 58, and various terrorist attacks around the world claimed many more.

If there ever was a year when All Souls Day had more poignant meaning for so many people, it would be hard to find it.

Mexico City, one of the hardest hit areas of the world this year, has already signaled that the recently deceased are very much in the public consciousness this November 2. Observance of the traditional Dia de los Muertos—the Day of the Dead—begins October 31 and runs through November 2, All Souls Day. But the Mexican capital witnessed a Dia de los Muertos parade on Saturday that gave a special nod to the nearly 500 victims of the September 5 earthquake in the country’s South and the one that violently shook the Mexico City region on September 19.

“Thousands of onlookers cheered and applauded as a giant raised fist constructed out of hard hats and pickaxes led the procession, signifying the resilient spirit of a country hit with one of its worst calamities in decades,” the New York Times described. “There were dancing devils. Towering skeletons. Altars festooned with marigolds.”

Meanwhile, in California, Sonoma County hosted a Day of Remembrance at Santa Rosa Junior College, ringing a memorial bell to honor the 42 people who died in wildfires in Sonoma, Napa, Yuba and Mendocino counties, SFGate reported. “It’s events like these that teach us how fragile life really is,” Sheriff Rob Giordano told the crowd. “Really, the No. 1 focus of today is to not forget the people we lost.”