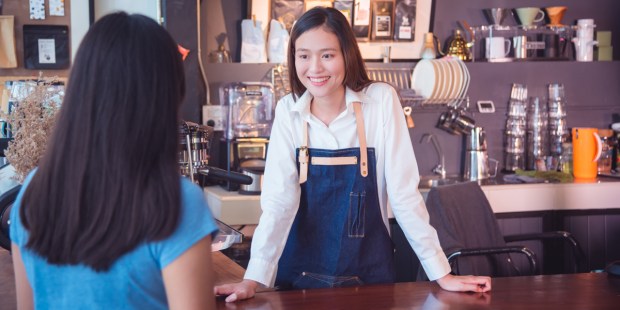 How to make your conversations a little more “Jane Austen” and a little less “Keeping Up with the Kardashians.”

Remember watching Pride and Prejudice (the BBC version, obviously) and being enchanted by the characters’ eloquent exchanges? Even their banal, passing observances are poetic, and make our most mannerly modern conversations sound harsh.

Conversing with one another used to be an art. People were taught by their parents, teachers, governesses, etc., how to converse politely, with wit and elegance. In a world where an emoji’s worth a thousand words, and expressions like “FML” are spoken aloud, not simply dashed off carelessly from people’s phones, it’s safe to say our ability to communicate has greatly declined.

But never fear — here are a few practices you can incorporate into your daily chit-chat to make your conversations a little more like Austen-land and a little less like Keeping Up with the Kardashians.

Okay, maybe not anything, but pretty much. This may sound obvious, but the first step to becoming a captivating conversationalist is to start talking. These days most of us are likely to be absorbed by our cell phones at the first sign of a dull moment. Don’t be that person. Look around you and make a comment that matters. Don’t just say, “It’s raining out.” Duh. Say something that invokes a response, such as, “Goodness, I bet the lines are long today because everyone’s stocking up for the Super Bowl. Which team are you rooting for?”

The person you’re conversing with will most likely have an opinion on the matter, or at least an interesting reason for not caring about the game. If you start the conversation with a question or remark that merits a more detailed response, suddenly your small-talk is meaningful, and you can …

Try to learn something

Ask your conversation partner questions. Small talk doesn’t have to be a forgettable way to fill time. If, for instance, in the scenario I described above, the person replied that he was cheering for the Steelers because he went to college in Pittsburgh, you could say something like, “Did you enjoy living in Pittsburgh? I’ve never been there. What’s it like?”

People enjoy sharing their knowledge and passions, and asking questions makes them feel valued as a sort of trusted expert. But don’t cross-examine the person or forget to add your own observations. This isn’t a one-on-one 60 Minutes interview. “People who asked more questions, particularly follow-up questions, were considered more likable,” The Huffington Post reported in June on a Harvard study. “The goal in small talk, according to [the researcher], is to strike a balance between question asking and answering, without being too interrogative.”

Keep things light. It’s best, we all know, if you don’t know someone very well, to avoid controversial topics like politics and religion. Of course you don’t have to agree on everything, and it can be fun to challenge the other person to explain his or her viewpoints in more depth, but if you feel the conversation starting to become contentious, steer it back to more neutral turf. You can fight later, when you’re BFFs or married.

A big part of being able to ask inciteful questions and supply thoughtful commentary involves listening to and absorbing what the other person says. It’s also polite. Be pleasant. Make eye contact. Stay engaged. Don’t look at your phone or at the distractions out the window. Laugh at, or at least offer a smile to their jokes, even if they’re lame.

A good way to keep a conversation going is to find a connection with the other person and explore it. Having something in common with somebody else goes a long way toward establishing a bond, and it also gives you fuel for a fun and friendly conversation. If you’re getting on the elevator with a co-worker and notice she’s changed into her gym clothes, ask her what gym she goes to, what trails she likes to run, what’s her favorite music to listen to while she pumps iron. Once you form a connection, your conversations will likely evolve, you’ll find more connections, and the conversation will come naturally.

The odious Mr. Collins — to bring it back full-circle to Pride and Prejudice — proudly admits to arranging little contrived compliments for the ladies in his head. While I don’t think it’s necessary to rehearse would-be conversations to yourself (and definitely don’t admit to it), it certainly doesn’t hurt to stash a few conversation starters in your pocket. and to help with that themuse.com provides us with 48 handy question ideas that will surely spark a conversation.

Read more:
How to be a master of intentional listening

Read more:
Listening is pastoral care, and even you can do it