Is sharing your grief with others really TMI? 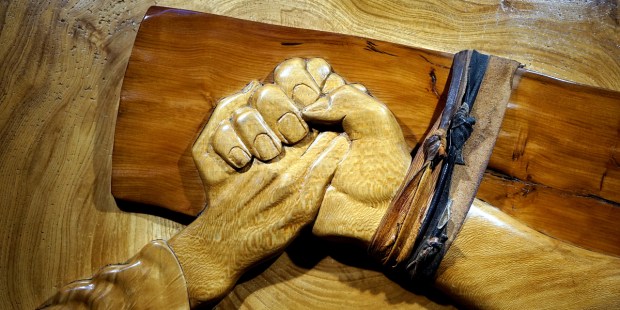 Sometimes keeping your sorrows to yourself only adds to pain.

A small debate was going on this weekend, across different sections of the Sunday New York Times. In the op-ed section, Ross Douthat cautioned readers to be more open to sharing and seeing misery. In the Style section, another columnist advised a reader that it was best to keep sorrow private. The dueling pieces effectively contrast the modern, cautious approach to grief with a more generous and vulnerable one.

In the Social Qs column (a quippy take on Dear Abby), Philip Galanes fielded a question from a reader who had previously offered to host a friend on her babymoon, but now felt uncomfortable. The pregnant friend is expecting twins, the prospective host had recently lost her own twins in a stillbirth, but hadn’t shared the news of her loss. The letter writer wondered if it might be best to email her friend and to tell her about losing her babies, so she wouldn’t have to retell it in person or suppress her grief during the visit.

Galanes agreed that the topic was tricky to broach, and recommended side-stepping it entirely, by telling the pregnant friend that they’d be out of town during the visit. Galanes explained his reasoning, “Given your mirrored circumstances, I don’t see how you could get through the evening without revisiting your loss, which would be miserable for you. And just as bad, I don’t see how your story could be anything but terrifying for a couple in their position.”

But Douthat’s column suggest that it’s a mistake to assume that misery is always an imposition, something that can’t be “anything but terrifying.” If nothing else, he writes, sharing misery is a kind of truth-telling. The more pressure we feel to keep it private, the more warped our view of the world becomes. Douthat writes:

“A strong filter also creates real problems, because it effectively lies about reality to both the healthy and the sick. It lies to the healthy about the likelihood that they will one day suffer, hiding the fact that even in modernity the Book of Ecclesiastes still applies. It lies to the sick about how alone they really are, because when they were healthy that seemed like perfect normalcy, so they must now be outliers, failures, freaks.”

Sharing sorrow can be a way of welcoming others, not just as they are now, but as they may be, if something goes wrong. Last spring, a new friend of mine made exactly the “mistake” that Galanes cautioned his letter writer against, and, by doing so, gave me a tremendous gift.

My husband and I had just found out that we were pregnant, and we told our new friend and her husband when they came over for dinner. They congratulated us, but then she practically blurted out that she’d had a miscarriage. She felt terrible about sharing her sad news in response to my good one, and told her husband after our dinner that she didn’t know what had come over her. My guess: it was the Holy Spirit.

Just a few weeks later, I lost my baby, Robin, in an early miscarriage, and, because my friend had shared the news of her loss with me, she was one of the first people I reached out to. My comfort came from the women like her, who had, like Christ, offered me their wounds as a gift.

In the absence of the witness my friends offered me, the witness Douthat encourages people to offer or to welcome, the world can feel thin. It’s like entering a Protestant church full of sterile crosses with no crucified Christ in sight. If the Cross is treated as an aberration, something only flamboyantly suffering saints are called to, then Christ is not fully present to any of the rest of us.

We may not reveal our wounds to everyone, or at every time and place—the advice given in Social Qs is probably the right advice for someone. But, if we must keep some griefs private, that is itself a privation, one of the pains of our exile. Our eschatological hope is that of Revelation, ”God himself will be with them; he will wipe every tear from their eyes.”(Rev 21:4).

Revealing a grief, or making someone welcome to reveal their grief or fear to us, is a way of looking forward to that day, of praying “Thy kingdom come, on earth as it is in heaven.”