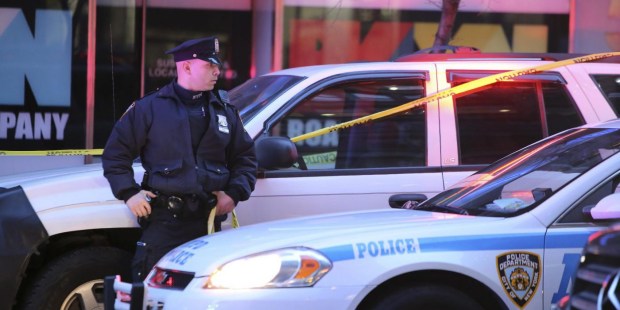 At least 8 people killed after driver yells Allahu Akbar and mows down bikers and pedestrians.

The mayor of New York City has acknowledged that today’s slaughter in lower Manhattan was an act of terrorism.

Mayor Bill DeBlasio, speaking at a press conference Tuesday afternoon, said, “Based on information we have at this moment, this was an act of terror, and a particularly cowardly act of terror aimed at innocent civilians.”

At least eight persons were killed when the driver of a small truck drove purposely into a popular bike path. At least 11 people were injured.

The Wall Street Journal reported that shortly after 3 p.m., the driver entered the bike path along the West Side Highway near Chambers Street, striking and killing several people. The scene is close to the World Trade Center, where Islamic terrorists brought down the old Twin Towers in 2001.

The driver, identified as Sayfullo Saipov, smashed into a school bus in front of a high school at a time when students would have been leaving. Two adults and two children on the bus were injured.

Saipov jumped out of his truck and ran up and down the highway waving a pellet gun and paintball gun and shouting “Allahu Akbar,” Arabic for “God is great,” the New York Times reported. He then was shot in the abdomen by police. Tuesday night, he was in critical condition in a local hospital.

Federal law enforcement authorities were taking the lead in the investigation. Two law enforcement officials said that investigators discovered handwritten notes in Arabic near the truck that indicated allegiance to ISIS.

The newspaper reported that Saipov came to the United States from Uzbekistan in 2010, and had a green card. Officials said it was the worst terrorist attack in New York City since Sept. 11, 2001. It brought to mind the terrorist attack last year in Nice, France, in which a cargo truck killed scores of people celebrating Bastille Day; on London Bridge in June, where eight were killed, and on Barcelona’s La Rambla, leaving 13 dead this August.

A recent edition of Rumiyah, a magazine used by ISIS, called for attackers to mow down pedestrians with trucks, continue the attacks with a knife or a gun and claim credit by shouting or leaving leaflets, the Times noted. The paper said that investigators discovered handwritten notes in Arabic near the truck in today’s attack that indicated allegiance to the Islamic State.