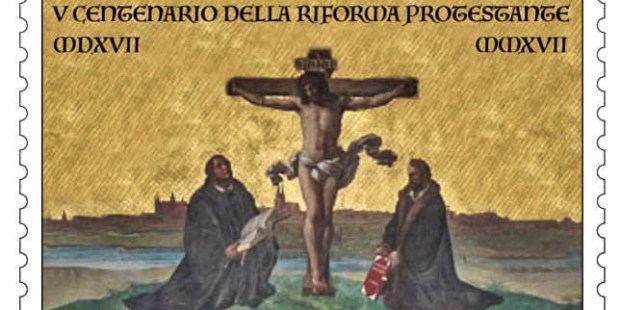 And another of a great saint who worked to save the Church from the errors of the Reformation, Francis de Sales

The first stamp—with a value of 1€—depicts Martin Luther and Philipp Melanchthon (also a protagonist of the Reformation) kneeling at the foot of the Cross “in a penitent attitude,” according to the explanation from the Philatelic Office. The announcement of this stamp comes 500 years to the day after Martin Luther nailed his 95 Theses on the door of the Castle Church of Wittenberg, Germany, on October 31, 1517.

The explanation accompanying the stamp refers to extracts from Pope Francis’ discourse during his visit to Sweden, on October 31 and November 1, 2016. The faith in Jesus Christ shared by Catholics and Protestants requires daily conversion and demands that we reject “historical disagreements and conflicts,” the pontiff explained. He added that “the unity of Christians is a priority.”

For its part, the ornate stamp of a portrait of St. Francis de Sales, in the style of a stained glass window, has a face value of € 2.55. As a patron of writers and journalists, he is presented with a pen in his hand. This saint “lived his ministry with a strong will to save the Church of Rome from the Calvinist Reformation,” the explanation reads. It goes on to say, “It is for the love of God that he brought back to communion with the Catholic Church many of the faithful who had separated themselves from it.”

In addition, this French saint, born in Haute-Savoie on August 21, 1567, inspired many religious congregations, such as the Salesians of St. John Bosco, because “he embodied the principles of love, optimism, and Christian humanism.” St. Francis de Sales was canonized in 1662, only three years after his death.