Pope denounces “homicidal madness that abuses the name of God” 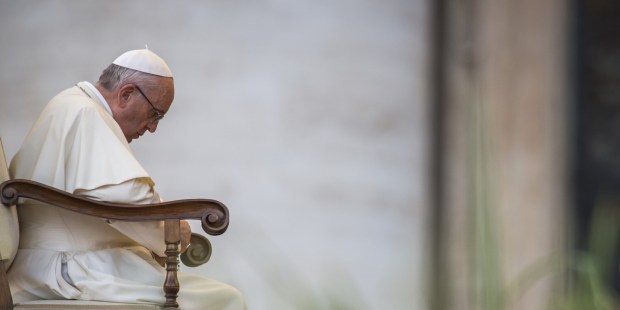 After Angelus, he prays that the Lord will convert the hearts of terrorists and free the world from hatred

Today, on the occasion of All Saints’ Day, Pope Francis led the praying of the Angelus from his window with pilgrims gathered in Saint Peter’s Square. In his address after the prayer, he denounced “the homicidal madness that abuses the name of God to disseminate death.”

The crowd was particularly large for this traditional recitation of the Angelus. Participants in the “Race of Saints,” a course of which ended in front of St. Peter’s Square, were also there. Under a bright blue sky, the pilgrims cheered the pontiff when he appeared.

After the Marian prayer, Pope Francis spoke once again of the Islamist terrorist attacks in recent days in Somalia (October 28 with 27 dead), Afghanistan (October 31 at least four dead) and in New York (October 31 with eight dead).

The pope assured that he prayed for the victims and their families. He also prayed that “the Lord will convert the hearts of terrorists and free the world from hatred and the homicidal madness that abuses the name of God to disseminate death.”

The “simple and hidden people” who help God

Before the prayer of the Angelus, Peter’s Successor explained that All Saints’ Day is a family celebration, of “so many simple and hidden people who actually help God.” They are the ones who believe that the Lord is their “treasure in life” and want to live in His love. The pontiff asked the crowd to give a hearty applause for those “who help the world to move forward.”

The path of holiness is a path of joy, and is taught to us by Christ himself, explained the Supreme Pontiff: it is the way of the Beatitudes (Mt 5:3), as we heard in today’s Gospel reading. These, he said, do not demand that we perform spectacular feats of supermen, but are rather for those who live “the trials and the fatigues of every day.”

In fact, the saints also suffered from sin while in the world, but “never lost sight of the path traced by Jesus.”  They are not “perfect models,” but rather people who welcomed the light of God into their hearts and transmitted it to the world, like stained glass windows letting God’s light shine through them. To achieve this, they fought against the “stains and darkness of sin.” Thus, God “passes through” the saints, “our brothers and sisters.”

Among the groups greeted by the Bishop of Rome was a group of Irish pilgrims from the city of Derry. He also greeted the participants in the “Race of Saints,” organized in Rome by the Dicastery for Laity, Family, and Life. The race’s route was designed to pass in front of emblematic basilicas of the Eternal City.

Lastly, the Sovereign Pontiff reminded those present that he would celebrate Mass the following day at the American cemetery in Nettuno, where thousands of American soldiers from World War II are buried, before stopping at the Fosse Ardeatine, site of a Nazi wartime massacre of Italians. These two stages of remembering the war, he stressed, will be dedicated to commemorating and praying for the victims of war and violence.