What can US do to prevent “truck terrorism?” 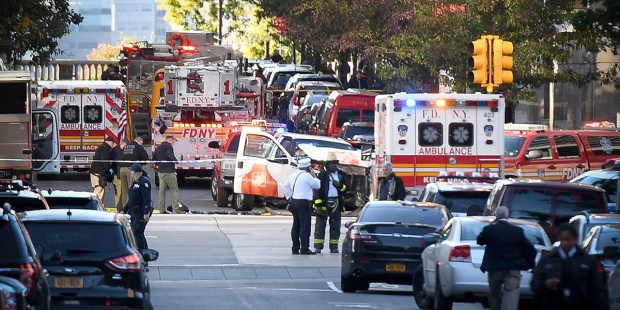 The suspect in Tuesday’s truck terrorism attack in New York City, Sayfullo Habibullaevic Saipov, came to the United States from Uzbekistan in 2010, and had a green card that allowed him permanent legal residence here. After he mowed down several pedestrians and cyclists on a popular track near the World Trade Center, a note was found in or near his rented pickup truck saying he carried out the attack in the name of the Islamic State group, several media outlets reported.

Could the attack, which killed eight people and wounded 12, have been prevented? Since there have already been several high profile vehicular terrorist attacks in Western Europe, is it a method we can expect to see more and more?

“This is the 27th such attack since 2002, and the third such attack in the U.S.,” said Kenneth Gray, of the University of New Haven’s Henry C. Lee College of Criminal Justice and Forensic Sciences.” The two previous vehicular attacks on U.S. soil were in Chapel Hill, N.C. in 2006 and Columbus, Ohio, in 2016. Gray and colleague Vesna Markovic have been tracking vehicle attacks in terrorism for some time.

“Terror attacks utilizing vehicles are very hard to interdict,” Gray said in an interview Wednesday. “There is no bomb-making, no weapon procurement, training phase or even planning phase in which the attack could be identified and stopped. Both the Islamic State and Al Qaeda in the Arabian Peninsula (AQAP) have called for their followers to use vehicles as weapons. In Fall 2010, AQAP, in their online magazine Inspire recommended using pick-up trucks as the ‘ultimate mowing machine,’ and in 2014 [the Islamic State], in their online magazine Dabiq, quoted Shaykh Abu Muhammad al-Adnani in a speech on September 21, 2014, instructing his followers, ‘If you are not able to find an IED or a bullet, then single out the disbelieving American, Frenchman, or any of their allies. Smash him over the head with a rock, or slaughter him with a knife, or run him over with your car….'”

Even though some 30,000 to 40,000 people die in automobile accidents a year in the U.S., terrorists’ use of vehicles “will add a sense of menace to daily life,” Gray said. “Cars are part of everyday life. The best defense is awareness of one’s environment.”

Considering that Saipov rented the vehicle he used to attack, could it help to implement some kind of background check system among car rental outlets? Gray believes that would be “overkill.”

“The bad guys have used their own vehicle, their work vehicle, rented a vehicle, or even stolen a vehicle to carry out the attacks,” he said.

After the Halloween afternoon slaughter, investigators began to find that Saipov had already been on the radar of federal authorities. Three officials said he had come to federal authorities’ attention as a result of an unrelated investigation, but it was not clear whether that was because he was a friend, an associate or a family member of someone under scrutiny or because he himself had been the focus of an investigation, reported the New York Times.

Over the last two years, a terrorism investigation by the F.B.I., the Department of Homeland Security, the New York Police Department and federal prosecutors in Brooklyn resulted in charges against five men from Uzbekistan and one from Kazakhstan of providing material support to ISIS. Several of the men have pleaded guilty. It is unclear whether Mr. Saipov was connected with that investigation.

Martin Feely, a spokesman for the New York F.B.I. office, declined to comment on whether Mr. Saipov was known to the bureau.

For the past few years, police in New York have reached out to businesses that rent vehicles to warn them about possible terror threats and to let them know about ways to come forward, CNN reported:

“We did extensive outreach to the truck rental business. We visited over 148 truck rental locations in this area,” New York Police’s Deputy Commissioner of Intelligence and Counterterrorism John Miller said at a Tuesday news conference. “The industry has had a high level of awareness on this matter from the NYPD.”
Miller said that if a company is suspicious of a would-be renter, they usually delay or simply deny a rental to let police investigate it.

But if background checks are difficult, and public safety measures cumbersome, another, possibly more fruitful avenue is learning ways to recognize suspects who are likely to carry out such attacks.

“We need to understand, far better than we now do, the process of violent extremist radicalization, to understand the conditions and circumstances that enable or favor it, to figure out how to detect when and where and with whom it is taking place, and to design ways to counter it,” said Herman B. “Dutch” Leonard, the George F. Baker, Jr.  Professor of Public Management and Faculty Co-Director of the Program on Crisis Leadership at Harvard’s John F. Kennedy School of Government. “Relatedly, we need to help communities in which this is taking place become allies in the prevention of violence like this.”

Leonard, in an interview, argued that instead of demonizing communities such as Muslim Americans, we need to cultivate relationships that would help pave the way for friends, neighbors and associates to come forward with information on warning signs.

“Activating people who make such observations – convincing them that they should not turn a blind eye or simply hope for the best when they see signs of trouble – should be a high priority,” Leonard said.

Law enforcement authorities said Wednesday that Saipov was “radicalized” and that he had meticulously planned the attack for weeks, USA Today reported.

Some people close to Saipov had feared for years that he was heading down the path of extremism, the Times reported Wednesday.

He drew concerns at a mosque in Tampa that he attended before moving to New Jersey.

A preacher at the mosque, Abdula, who agreed to speak on the condition that only his first name be used because he feared reprisals from other radicals, said he tried to steer Mr. Saipov away from the path of extremism.

“I used to tell him, ‘Hey, you are too much emotional,’” Abdula said. “‘Read books more. Learn your religion first,’ He did not learn religion properly. That’s the main disease in the Muslim community.”

He added, “I never thought that he would go to this extreme.” …

Abdula recalled Mr. Saipov getting emotional over issues related to the Muslim community. He said Mr. Saipov was devoted to outward observances of Islam, like his beard, but not necessarily the substance.

“In terms of prevention, this threat (like all others) can be seen as a function of capabilities and intentions,” said James Forest, Professor in the School of Criminology and Justice Studies at the University of Massachusetts Lowell, in an interview. “In this case, there is a very low threshold for the capabilities question—literally anyone could carry out this kind of attack in any number of ways, in any number of locations. The fact that we haven’t seen more such attacks is largely because only relatively few individuals have the intention of doing so. Among them, research indicates that (especially regarding lone attackers, like this one) there are behavioral indicators that one could look for to identify a potential heightened threat (for example, was he considered an isolated loner? Any aggressive tendencies? Adamantly blaming others for what’s wrong in his world?)

“We also know from research that a majority of these attackers conveyed their intentions in some way or another to a close friend, associate, family member, teammate, etc., which leads us back to the ‘see something, say something’ motto—the better we educate the public on what to look for, the better our chances that information and people of concern will be reported to the authorities before something actually happens.”