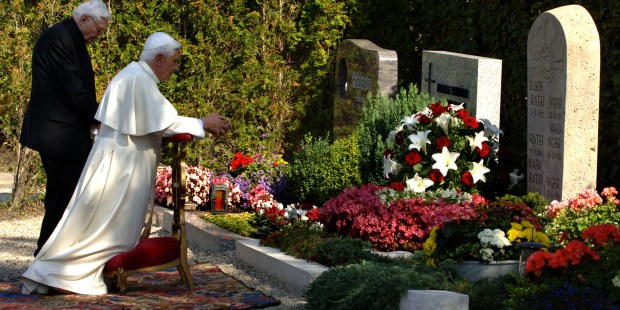 10 Years after his encyclical on hope, Spe Salvi, today is a good time to review, or read for the first time, this profound but accessible explanation

This month we are coming up on the 10th anniversary of the release of Benedict XVI’s profound encyclical on hope, a theme that also speaks strongly to Pope Francis, as evidenced by his just-concluded series of Wednesday catecheses on the topic.

Spe Salvi includes eight paragraphs on the theme of our judgment, “as a setting for learning and practicing hope.”

Part of what the German pontiff illustrates in that section is purgatory. He says, “The judgement of God is hope, both because it is justice and because it is grace.”

Here is a four-paragraph excerpt of the section, particularly fitting for our prayer and reflections on All Souls Day. The emphases in bold are our own.

45. This early Jewish idea of an intermediate state includes the view that these souls are not simply in a sort of temporary custody but, as the parable of the rich man illustrates, are already being punished or are experiencing a provisional form of bliss. There is also the idea that this state can involve purification and healing which mature the soul for communion with God. The early Church took up these concepts, and in the Western Church they gradually developed into the doctrine of Purgatory. We do not need to examine here the complex historical paths of this development; it is enough to ask what it actually means. With death, our life-choice becomes definitive—our life stands before the judge. Our choice, which in the course of an entire life takes on a certain shape, can have a variety of forms. There can be people who have totally destroyed their desire for truth and readiness to love, people for whom everything has become a lie, people who have lived for hatred and have suppressed all love within themselves. This is a terrifying thought, but alarming profiles of this type can be seen in certain figures of our own history. In such people all would be beyond remedy and the destruction of good would be irrevocable: this is what we mean by the word Hell[37]. On the other hand there can be people who are utterly pure, completely permeated by God, and thus fully open to their neighbours—people for whom communion with God even now gives direction to their entire being and whose journey towards God only brings to fulfilment what they already are[38].

46. Yet we know from experience that neither case is normal in human life. For the great majority of people—we may suppose—there remains in the depths of their being an ultimate interior openness to truth, to love, to God. In the concrete choices of life, however, it is covered over by ever new compromises with evil—much filth covers purity, but the thirst for purity remains and it still constantly re-emerges from all that is base and remains present in the soul. What happens to such individuals when they appear before the Judge? Will all the impurity they have amassed through life suddenly cease to matter? What else might occur? Saint Paul, in his First Letter to the Corinthians, gives us an idea of the differing impact of God’s judgement according to each person’s particular circumstances. He does this using images which in some way try to express the invisible, without it being possible for us to conceptualize these images—simply because we can neither see into the world beyond death nor do we have any experience of it. Paul begins by saying that Christian life is built upon a common foundation: Jesus Christ. This foundation endures. If we have stood firm on this foundation and built our life upon it, we know that it cannot be taken away from us even in death. Then Paul continues: “Now if any one builds on the foundation with gold, silver, precious stones, wood, hay, straw—each man’s work will become manifest; for the Day will disclose it, because it will be revealed with fire, and the fire will test what sort of work each one has done. If the work which any man has built on the foundation survives, he will receive a reward. If any man’s work is burned up, he will suffer loss, though he himself will be saved, but only as through fire” (1 Cor 3:12-15). In this text, it is in any case evident that our salvation can take different forms, that some of what is built may be burned down, that in order to be saved we personally have to pass through “fire” so as to become fully open to receiving God and able to take our place at the table of the eternal marriage-feast.

47. Some recent theologians are of the opinion that the fire which both burns and saves is Christ himself, the Judge and Saviour. The encounter with him is the decisive act of judgement. Before his gaze all falsehood melts away. This encounter with him, as it burns us, transforms and frees us, allowing us to become truly ourselves. All that we build during our lives can prove to be mere straw, pure bluster, and it collapses. Yet in the pain of this encounter, when the impurity and sickness of our lives become evident to us, there lies salvation. His gaze, the touch of his heart heals us through an undeniably painful transformation “as through fire”. But it is a blessed pain, in which the holy power of his love sears through us like a flame, enabling us to become totally ourselves and thus totally of God. In this way the inter-relation between justice and grace also becomes clear: the way we live our lives is not immaterial, but our defilement does not stain us for ever if we have at least continued to reach out towards Christ, towards truth and towards love. Indeed, it has already been burned away through Christ’s Passion. At the moment of judgement we experience and we absorb the overwhelming power of his love over all the evil in the world and in ourselves. The pain of love becomes our salvation and our joy. It is clear that we cannot calculate the “duration” of this transforming burning in terms of the chronological measurements of this world. The transforming “moment” of this encounter eludes earthly time-reckoning—it is the heart’s time, it is the time of “passage” to communion with God in the Body of Christ[39]. The judgement of God is hope, both because it is justice and because it is grace. If it were merely grace, making all earthly things cease to matter, God would still owe us an answer to the question about justice—the crucial question that we ask of history and of God. If it were merely justice, in the end it could bring only fear to us all. The incarnation of God in Christ has so closely linked the two together—judgement and grace—that justice is firmly established: we all work out our salvation “with fear and trembling” (Phil 2:12). Nevertheless grace allows us all to hope, and to go trustfully to meet the Judge whom we know as our “advocate”, or parakletos (cf. 1 Jn 2:1).

48. A further point must be mentioned here, because it is important for the practice of Christian hope. Early Jewish thought includes the idea that one can help the deceased in their intermediate state through prayer (see for example 2 Macc 12:38-45; first century BC). The equivalent practice was readily adopted by Christians and is common to the Eastern and Western Church. The East does not recognize the purifying and expiatory suffering of souls in the afterlife, but it does acknowledge various levels of beatitude and of suffering in the intermediate state. The souls of the departed can, however, receive “solace and refreshment” through the Eucharist, prayer and almsgiving. The belief that love can reach into the afterlife, that reciprocal giving and receiving is possible, in which our affection for one another continues beyond the limits of death—this has been a fundamental conviction of Christianity throughout the ages and it remains a source of comfort today. Who would not feel the need to convey to their departed loved ones a sign of kindness, a gesture of gratitude or even a request for pardon? Now a further question arises: if “Purgatory” is simply purification through fire in the encounter with the Lord, Judge and Saviour, how can a third person intervene, even if he or she is particularly close to the other? When we ask such a question, we should recall that no man is an island, entire of itself. Our lives are involved with one another, through innumerable interactions they are linked together. No one lives alone. No one sins alone. No one is saved alone. The lives of others continually spill over into mine: in what I think, say, do and achieve. And conversely, my life spills over into that of others: for better and for worse. So my prayer for another is not something extraneous to that person, something external, not even after death. In the interconnectedness of Being, my gratitude to the other—my prayer for him—can play a small part in his purification. And for that there is no need to convert earthly time into God’s time: in the communion of souls simple terrestrial time is superseded. It is never too late to touch the heart of another, nor is it ever in vain. In this way we further clarify an important element of the Christian concept of hope. Our hope is always essentially also hope for others; only thus is it truly hope for me too[40]. As Christians we should never limit ourselves to asking: how can I save myself? We should also ask: what can I do in order that others may be saved and that for them too the star of hope may rise? Then I will have done my utmost for my own personal salvation as well.