Do you want to be counter-cultural? Write a letter 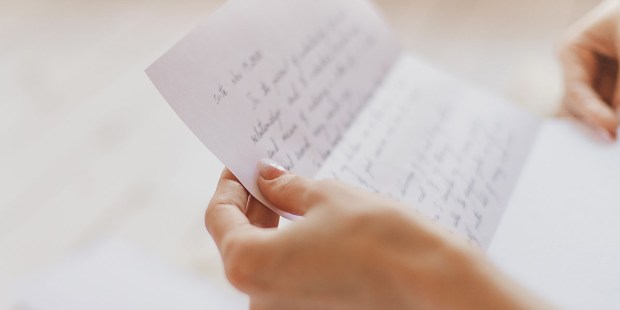 Writing is profoundly human, and a lost art we need to restore.

Almost nobody receives handwritten letters anymore. You pass by your house’s mailbox, and if you’re like most people, you probably prefer that it be empty, because if there’s anything inside it’s almost certainly a traffic ticket, a bill, or junk mail you couldn’t care less about. The only thing even vaguely interesting might be an IKEA catalog. Am I right?

The business part of our lives usually involves getting letters, but they’re totally impersonal. You know: the kind of letter the bank sends you, offering you a new line of credit (and they make a real effort to make you think you’re someone special to them, although they spell your name wrong) — or a form letter from the insurance company, promising to give you a second life if you change companies. They are letters devoid of real humanity.

On the contrary, how it changes our life when we receive a hand-written letter! We look at the return address, and our heart beats faster. What does this person have to say to me that’s so special that they sent me a letter instead of an email, a text message, or a phone call? We open the envelope, and we are eager to read. It’s from someone who has already demonstrated that he or she has dedicated time to contacting us; someone who has thought about us and has taken up pen and paper to go through the trouble of sharing a moment of their life with us. A handwritten letter today can awaken in us more powerful emotions than a treasure chest on a desert island; it can inspire and evoke memories, a feeling of happiness, the yearning for a loved one who is far away …

“You are important to me”

Today, letters are a sign of luxury. Writing a letter requires a serious expenditure of time, which is something we can’t all afford. You have to start by searching for the right kind of paper, and then sit down at a desk or table and concentrate so we can scribble a few letters. It’s an “investment” for whoever is writing, and also for the recipient. A letter means “you are important to me.”

Do you want to rebel against the system? Write a letter. Do you want to be a revolutionary? Do something that nobody does anymore. I’m sure your mother loves to receive text messages from you and your cousins, siblings, and uncles and aunts. However, if you write her a letter on paper or on a card telling her you love her and that you thought of her on her birthday or another special day, you’ll see that it will be more pleasing to her than any email. And now that Christmas is just a few weeks away, ask yourself what better surprise your loved ones could receive than a message written in your own hand. Or, looking ahead to Valentine’s Day, what says “I love you” more than a card where you say something special, in your own words and handwriting?

Fear of the blank page — “What do I say? How do I start?” — is a syndrome that deters many people. They prefer to avoid that moment of panic and replace a letter with some flowers delivered by a florist, or with a good dinner. Of course, these are great options, but I think we can agree that sometimes we have something inside our minds that we’ve wanted to say to someone, but never have. Why not tell them, once and for all? Try it today, when you’re done reading this article (or before), maybe even using a paper napkin from the café where you’re drinking a macchiato and reading this on your tablet or smart phone. If Picasso and Dali left signed works on paper napkins, you won’t come across badly if you send a napkin.

Writing helps us to clarify our thoughts, strengthen memories and decisions, and sometimes, it even helps us explain ourselves to ourselves. It helps us clarify our sense of purpose in life, and shows the person we are writing to that we want them by our side on the path of life. Writing is useful for saying thank you, for asking forgiveness, for forgiving, for building bridges, for renewing a friendship, for asking for a favor … for every kind of human relationship. Animals and plants can do many beautiful things, but they will never be able to write to another member of their species. Writing is profoundly human.

Sending letters has been a vital form of communication for thousands of years. Letters have been a vital source of historical knowledge; they have given us insights into the lives of people ranging from otherwise anonymous Roman soldiers to some of the Founding Fathers of the United States (John Adams and Thomas Jefferson’s letters have been conserved, as well as Adams’ correspondence with his wife Abigail). Letters such as these between historical figures have also been the inspiration and an important source for historical fiction.

Even today, on the level of individual families, letters can be a valuable resource for knowledge of our parents and ancestors long after they have died.  Many people carefully preserve letters of personal importance — whether they are love letters between spouses, missives from friends in other countries, or letters (even fairly impersonal ones) from famous people — as long as the paper bears their actual signature. By comparison, when was the last time you, or anyone you know, printed and framed a text message or an email as a cherished personal possession?

Celebration of the handwritten letter

As the handwritten letter is becoming something of a lost art, various initiatives have been born to try to infuse new life into this age-old form of communication. At the beginning of each year in the US, on January 17, people celebrate National Send-A-Handwritten-Letter Day. There’s also Handwritten Letter Week, April 17-23, which has its origin in Spain, but whose promoters hope it will also achieve international status. Then we have World Letter Writing Day on September 1, which was originally an Australian initiative but which has spread around the world.

In the end, though, while national and international letter-writing events can help raise our awareness, we don’t need to wait for a special occasion to write a letter. All we need to do is pick up pen and paper, pick someone to write to, and start writing.

“Sending a letter is an excellent way of traveling somewhere else without moving anything but your heart.” (Tales of Count Lucanor, Juan Manuel, Prince of Villena, 1575)

“A letter always seemed to me like immortality, because it is the mind alone without a corporeal friend.” (Emily Dickinson, letter to Thomas Wentworth Higginson, 1870)

Read more:
The man who wrote 14 love letters (each one a clue)