‘Having Misidentified a Wildflower’: Tripping up a poet laureate 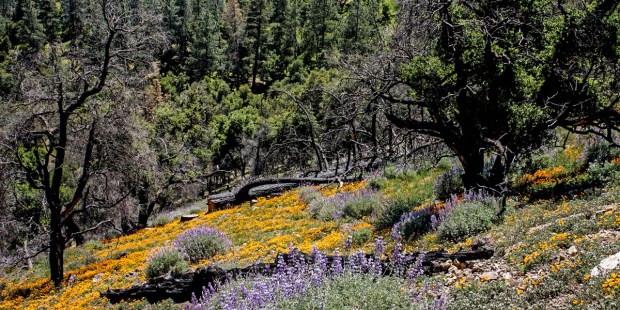 Wilbur’s mild and humble joke leaves us questioning everything we know.

Having Misidentified a Wildflower

A thrush, because I’d been wrong,
Burst rightly into song
In a world not vague, not lonely,
Not governed by me only.

Wilbur’s poking a little bit of fun at himself. He’s made some kind blunder that only an amateur naturalist would make, and a hidden thrush who’s witnessed his misplaced confidence bursts into song. In effect, she’s laughing at him. He takes the lighthearted chastisement well. It’s not like he’s the only one in the world who knows anything, after all.

Richard Wilbur passed away this month, and I thought that this single-sentenced poem of his, where he gently pokes fun at himself, sums up everything that this great man ever showed me about our world. But I want to let his words speak for themselves.

The poet and the thrush are the only characters here, and the thrush comes into the scene unexpectedly. If Wilbur hadn’t gotten the flower’s name wrong, she wouldn’t have started carrying on so noisily, and he’d never have noticed her. But thank goodness that she showed up to call him out, Wilbur seems to say. He’d been making a much bigger mistake than just getting some wildflower wrong.

When you’re walking by yourself out in the scrub brush, you can be naming things left and right, as confidently as you wish. But with no one to correct you, you’ll never know if, in fact, you’d be making any real naturalist laugh his head off at your bad attempts at classification. The funny thing is that in this case, the poet takes the point. He and the bird, in some way, understand each other.

Okay, yes, he’s being a bit facetious. He’s said that the thrush burst into song in response to his own misidentification, as if they were each using the same taxonomic categories for the world. But the larger point he takes away is an important one. He’d been acting, in his unthinking confidence, as if he were the only one who knew anything. But that’s not right at all, he is reminded. The world is “not vague, not lonely, not governed by me only.”

The little exchange between the man and the bird reminds him that yes, he governs his world, but not alone. As important as he may be, creation isn’t lonely and needy, waiting for him to come along and impose order on a badly defined world. That idea is worse than wrong, it’s ridiculous. The sudden appearance of the thrush is enough to remind the poet — and the reader — that we’re never really as alone as we think we are. We’re not actually alone when we walk alone in nature, and we’re not actually alone in governing the Earth, either.

It’s not a religious poem. Wilbur isn’t trying to throw us back to the Garden of Eden, to question God’s charge to man that we “fill the earth and subdue it.” It’s not some kind of environmentalist message that man is really no better than the animals. If Wilbur wanted to go there, he’d have needed to give us a lot more information than he did.

At heart, it’s a poem about how humanity’s self-confidence and self-importance is a bit silly. It’s a big world. There’s a lot going on around us, some of which is too complicated and intricate for us to come close to understanding. By setting up the thrush as a character who knows man’s scientific classifications of the world as well or better than man does, Wilbur sends a lighthearted but undeniable message. Our perspective of the world is valid, sure, but it’s not the only one, and just maybe, we don’t know as much as we think we do. Watch, listen, and you never know — you might come to see the world through eyes other than your own, and your life will be richer for it.