St. Martin de Porres: This reconstruction of his face reveals his humility and charity 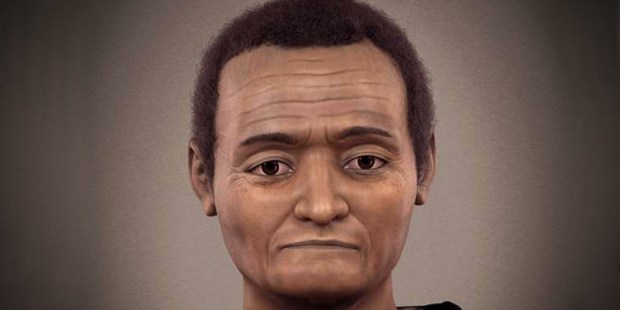 Scientists and designers combine efforts to show us what the 16th-century saint really looked like.

This is what Martin de Porres looked like at the age of 60. This is the face that science unveiled for us in 2015, thanks to the hard work of two young Brazilian scientists: Cicero Moraes, a 3D graphics designer, and Paul Miamoto, forensic odontologist. Both are members of the Brazilian Legal Anthropology and Odontology Team.

The saint’s loving and melancholic face speaks to us of a person from the 16th century who lived in the convent of Santo Domingo in Lima, Peru, and who decided to follow a path of holiness. He was later raised to the honor of the altars, being beatified in 1837 and canonized in 1962. His feast is November 3.

This image is the culmination of a project involving scientists and the Order of Preachers throughout the year 2015. The initiative started with the unveiling of the face of St. Rose of Lima in the summer, continued with that of St. John Macías in the fall, and concluded with that of St. Martin de Porres on November 3, 2015, at the Basilica of the Rosary of the Covent of Santo Domingo, located in the historical center of Lima, Peru.

His likeness was with us all the time

The facial reconstruction of the “saint of the broom” (given this name because of his humble service to the community) coincides well with two images that have always been kept in the possession of the Dominican friars. There is a painting of Brother Martin, found at the Monastery of Santa Rosa, and a sculpture which is located in the saint’s chapel, near his tomb, inside the convent of Santo Domingo.

The Brazilian scientists spoke about this similarity at a ceremony that was held after a Mass, attended by thousands of people, commemorating the 376th anniversary of the death of the saint.

“Without a doubt, the artists who made the painting and the sculpture depicted the person whose cranium we studied, and they represented him based on real information,” Moraes explained.

“We didn’t know that we had [his true likeness] with us for such a long time,” said the prior of the Convent of Santo Domingo, Fr. Luis Enrique Ramírez, with a smile. “This is a scientific reconstruction that is in no way a subjective and artistic interpretation.”

This similarity between traditional artistic portraits and scientific facial reconstructions did not occur in the recent cases of Saint Anthony of Padua and Mary Magdalen.

Miamoto, on his part, gave the Dominicans a 3D print of the face of the mulatto saint, and hopes to continue to contribute to cultural research using open-source software, so they can continue to apply and improve the quality of these techniques.

At the end of the ceremony for the unveiling of the face of Martin de Porres, amidst the applause and acclamations of the faithful, the Dominicans gave a memorial plaque to each of the scientists who worked on this contribution to the history of Peru.

Discovering the human face of holiness

The purpose of these efforts to reconstruct the true faces of saints is to reveal the human being behind the holiness. In the case of St. Martin de Porres, the scientists commented, the reconstruction took 24 hours, unlike previous projects that only took 16. This is because they also included part of his clothing and his hair.

When he died, St. Martin had only two teeth; this caught the scientists’ attention, because St. Martin must have had difficulty chewing, and perhaps even speaking. The asymmetry of his jaw is also visible in the artistic portraits kept in Lima.

Forensic odontologist Paul Miamoto explained that the loss of his teeth also meant that St. Martin de Porres had reduced volume in the area of his mouth.

Cícero and Paul were happy to have been able to contribute, with this scientific reconstruction, to the rediscovery of this saint, and to the world being able to see the face of a man who chose to dedicate his life to the path of holiness.

Martin embraced a path of faith and hope

“In discretion, in silence, Martin showed Jesus’ charity,” said Bishop Raúl Chao, auxiliary bishop of Lima, during his homily at the Mass concelebrated by priests of the Order of Preachers.

Brother Martin died on November 3, 1639. During his life in Lima, Peru, this man of God made prayer the center of his life, put charity into practice, and knew how to cultivate friendship. He and St. John Macías shared penitential practices and sacrifices, Bishop Chao related during the Mass that preceded the unveiling.

Giving to others what he little he had, sharing in the tasks of the convent, and being attentive to the needs of others, are a few of the attitudes of this Peruvian saint that we should all imitate, the auxiliary bishop concluded.

The Dominican museum now has real images of Peruvian saints

At the end of the ceremony, the Prior of the Convent of Santo Domingo announced the installation within the convent of three dioramas with a sculpture of each of the saints whose likeness has been rediscovered using these modern scientific methods.

With these projects, the simplicity and humility of these great Peruvian saints is brought to light: they were people of flesh and blood, who decided to live lives of holiness.

Read more:
Litany of St. Rose of Lima: For increase in holiness and decrease in vanity