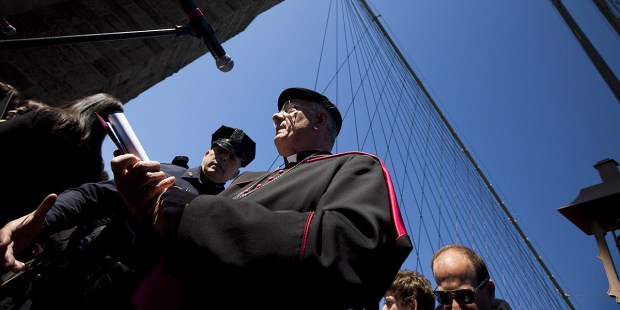 Returning from a “solidarity visit” to Puerto Rico this week, an American bishop said he would support a change in a law that critics say is hampering humanitarian efforts on the hurricane-battered island.

Bishop Nicholas DiMarzio of Brooklyn and Cardinal Timothy Dolan of New York made a one-day visit to the Diocese of San Juan Monday to deliver about $800,000 in funds collected in the greater New York area for residents, many of whom are still struggling without electricity and running water after Hurricane Maria hit the island as a high-end Category 4 storm.

Bishop DiMarzio, in an interview this week, voiced support for a modification of the Merchant Marine Act of 1920, commonly known as the Jones Act, which requires that all goods transported by water between U.S. ports be carried on U.S.-flag ships, constructed in the United States, owned by U.S. citizens, and crewed by U.S. citizens and U.S. permanent residents.

“The whole problem with the Jones Act, which was suspended for about 10 days but is now back in effect, so only American-flagged ships can deliver equipment to Puerto Rico, is that it complicates things quite a bit and raises the cost” to ship humanitarian aid to the island, he said. “That’s one of the things we’d like to advocate, that this be suspended, probably indefinitely.”

In the aftermath of Hurricane Maria, President Donald J. Trump issued a waiver of the Jones Act so that foreign-operated ships could temporarily deliver supplies. But the waiver expired October 8, and the White House has indicated it will not be extended.

According to the Arizona Republic, pressure is building on Congress to exempt Puerto Rico from the law. A march in Washington, D.C., is planned for November 19, and two U.S. senators, including John McCain, have introduced legislation to permanently exempt Puerto Rico.

“Our legislation would permanently exempt Puerto Rico from the Jones Act, an antiquated, protectionist law that has driven up costs and crippled Puerto Rico’s economy,” McCain said in a statement. “For years, I have fought to fully repeal the Jones Act, which has long outlived its purpose to the benefit of special interests. It’s time for Congress to take action, end this injustice, and help our fellow citizens in this time of need.”

The American Journal of Transportation, however, disputes that the Jones Act is the problem.

“The Jones Act does not force Puerto Rico to turn away relief supplies that did not come from the United States or require cargo shipped to Puerto Rico to come through the United States. In fact, both U.S. and foreign-flagged ships have delivered relief supplies to Puerto Rico,” the Journal said in a Q-and-A on the subject. “The storm destroyed the territory’s infrastructure, making it difficult to distribute relief supplies to those who need them. Repealing the Jones Act can’t fix the broken roads, bridges, communications systems, or power grids that are vital to distribution efforts.”

Dolan and DiMarzio toured San Juan, along with its bishop, Roberto Gonzalez, and witnessed scenes of destruction, deforestation and disrepair.

“San Juan is not as bad as the rest of the country,” said DiMarzio, who is chairman of the board of the Center for Migration Studies. “There are sturdier buildings and apartment buildings which could withstand the storm.”

One of those sturdier buildings is the 500-year-old Cathedral of St. John the Baptist, where the three bishops celebrated a Monday morning Mass.

“The cathedral lost some stained glass windows but the structure is intact,” the Brooklyn bishop said.

Cardinal Dolan spoke with a reporter from the Brooklyn Diocese’s Nuestro Voz/NET-TV while standing outside the cathedral. He saw the church as a symbol of Puerto Ricans’ strong faith in that the building has withstood about 200 hurricanes, including Maria.

“With all that they’ve been through, they haven’t lost their sense of hope,” the cardinal said of residents’ resilience. “But here’s the thing: this cathedral still has no water, and still has no electricity,” the cardinal said. “And this is after 40 days … They tell me there’s signs of progress, and they tell me the most difficult is water, and number two is transportation. They’re getting lots of supplies—blankets, water, clothing, food—but they can’t distribute them to the areas that need them. And the third problem is electricity.”

He said he and DiMarzio decided to visit Puerto Rico because “the misery here is more profound” than in other areas hit by major storms and earthquakes this year,” and because of the invitation of Bishop Gonzalez, who was once a parish priest in the Archdiocese of New York

“He said to me about two weeks ago, ‘We feel alone and forgotten,’ and I said ‘Darn it, we’re going to come see you,’” the cardinal said. “That’s what neighbors do. That’s what the Bible tells us to do. That’s what Holy Mother Church wasnts us to do.”

He said Gonzalez expressed thanks for the money raised in New York, a city whose Puerto Rican population might rival that of the island, “but your company means everything, and for our people to see you is a great great consolation.”