That time I took on the housework, like a man! 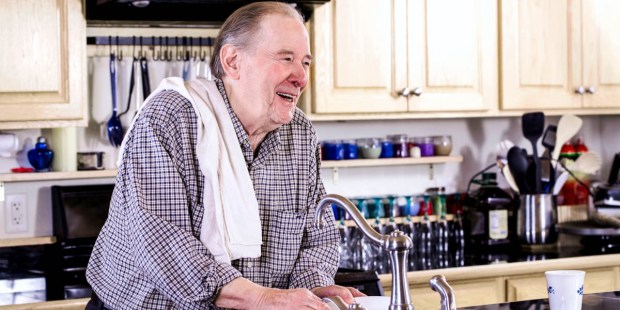 “Man may work from sun to sun, But woman’s work is never done.” —Old Proverb

That old proverb came home to me recently when my wife was struck with an attack of sciatica that pretty well immobilized her for six weeks or so. Up to then, my role in doing household chores was patterned after that of my paternal and maternal great grandfathers, both rabbis. The man’s prerogative was to study and the woman’s to make life easy for him (do you remember Fiddler on the Roof —”Tradition?”).  I had diapered a baby once or twice in my life but my knowledge of how to run a vacuum cleaner (outside of the physics of how it worked) was nil, and hospital corners on a bed were a topological mystery.

In partial defense of my very un-PC behavior, I’ll say that I have done a modest amount of household chores during my 20 years as a retiree: washed supper dishes, set the table, did my own laundry, and very occasionally cleaned up after the dog. This was in addition to chores that were once considered a man’s job — carrying out trash, fixing (occasionally destroying) electrical items and plumbing. And of course, yard work — ah, what a shot of testosterone you get from operating a gas/oil powered trimmer!

When my wife’s discomfort became debilitating our well-meaning children offered to come and help out, but they all live hours away and have obligations to their own families and jobs, so we thanked them for the offer and slogged on. The kids did make a few weekend visits and picked up chores supposedly beyond my 87-year-old male capabilities—mopping the floors, cleaning windows, cooking a roast, etc.

In principle, we could have hired a cleaning service, but we had tried this previously and — even though my wife knew how things should be done — the cleaning service personnel had ideas different from hers and followed a different protocol. Since she is diffident about telling people that they are not doing things the right way (her way), a cleaning service was not an option. On the other hand, I am close at hand and have shown that I can be educated, given the right motivation. So I proceeded, on a very steep learning curve, to become a house-husband.

I’ll spare you the daily schedule, but will say that I was dog-tired as the late evening news came on, and could barely keep my eyes open.  In terms of learning new things, I discovered the following:

In other words, my wife relaxed her standards and I raised mine.

Thanks be to God, her health has improved. After a steroid spinal injection, the pain lessened enough that she was able to progress from a walker to a cane, and to use an armless swivel chair on rollers (as an improvised wheelchair) to get back to dusting and preparing food to her own exacting standards, and I was charitably released from my duties.

Ultimately I found it a privilege to help my wife get the rest she needed in order to recover, but it was rewarding in other ways, too: I somehow lost 7 pounds! It is a joy to wear pants that were too tight three years ago.

So God gives us lessons in unusual and sometimes amusing ways. And I’m sharing a lot more of the domestic load than I did two months ago.