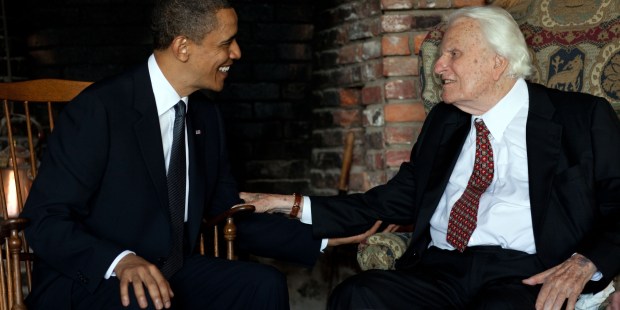 Lemon cake with lard icing is on the menu.

Evangelist Billy Graham will celebrate his 99th birthday tomorrow at his home in Montreat, North Carolina, reports the Charlotte Observer.

In a statement released this week, Graham’s son Franklin said, “As a family, we are so grateful that he is still with us.”

While the elder Graham can’t see or hear well, and doesn’t talk much, his son said “his mind is good … (and) his health is stable.”

An ordained Southern Baptist minister, Graham was the most well-known televangelist of the 20th century, and was a spiritual adviser to several American presidents, including Dwight D. Eisenhower, Lyndon B. Johnson, and Richard M. Nixon.

His long career spanned from the 1940’s when he became a household name through his annual Billy Graham Crusade until his last televised sermon, recorded on his 95th birthday, and broadcast by several networks. As recently as 1991, he held his largest event in North America ever, with about 250,000 gathering to hear him speak at Central Park in New York.

Graham will be celebrating his birthday with family and will be served a lemon cake with lard icing.

“He loves those cakes,” the younger Graham said. “But it has to have the lard icing.”