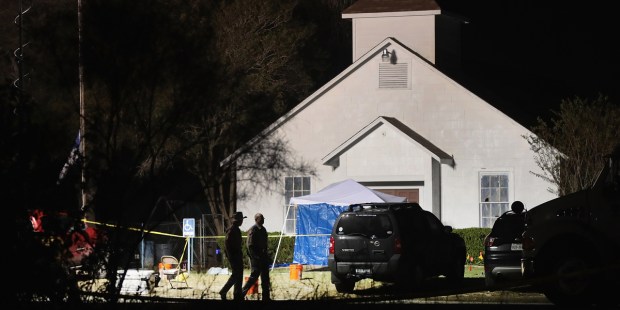 Small community mourns loss of pastor’s daughter, eight members of one family, and many others

Investigators are still trying to piece together the actions and motives leading up to Sunday morning’s massacre at the First Baptist Church in Sutherland Springs, southeast of San Antonio. Twenty-six people were killed, including eight members of one family and the 14-year-old daughter of the pastor.

“We know that his ex- in-laws or in-laws came to church here from time to time,” Wilson County Sheriff Joe Tackitt told CNN Monday, referring to 26-year-old Devin Patrick Kelley. “They were not here yesterday. So we don’t know why he actually showed up yesterday.”

Freeman Martin, a spokesman for the Texas Department of Public Safety, said during a news conference Monday morning, said that Kelley “had made threatening texts and we can’t go into detail into that domestic situation that is continuing to be vetted and thoroughly investigated,” the New York Times reported.

“This was not racially motivated, it wasn’t over religious beliefs, it was a domestic situation going on,” Martin said.

Kelley burst into the church shortly during the 11am service, wearing all-black tactical gear and a ballistic vest, using a Ruger AR-556 rifle to shoot as many people as he could. He was first shot by an armed resident who confronted him outside the church. He sped away in his Ford Explorer, and a chase ensued. Kelley was found dead in his vehicle later, along with multiple weapons. Authorities have said he turned the gun on himself.

The pastor was out of town when the shooting occurred, but his daughter, 14-year-old Annabelle Pomeroy, was at the church and was killed, her mother Sherri Pomeroy said. A visiting pastor, Bryan Holcombe, and his wife, Karla, was also among the dead, Sheriff Tackitt said.

The eight members of one family who were killed span three generations and include a woman who was about five months pregnant and three of her children. In all, 23 people died inside the church, two outside the church, and one at hospital. The total number of dead, who ranged from 18 months to 77 years of age, represents about 4% of the small town’s population. Twenty people were also wounded in the shooting.

CNN provided background on the shooter:

Kelley was a member of the US Air Force and served at Holloman Air Force Base in New Mexico from 2010 until his discharge, according to Air Force spokeswoman Ann Stefanek.
He was court-martialed in 2012 for assault on his spouse and assault on their child, according to Stefanek. He served a year in confinement, received a bad conduct discharge and had his rank reduced, she said.
In April 2016, Kelley purchased the Ruger AR-556 rifle he allegedly used in the shooting from a store in San Antonio, Texas, a law enforcement official said. There was no disqualifying information in the background check conducted as required for the purchase, a law enforcement official told CNN.
At one point, the shooter tried to get a license to carry a gun in Texas but was denied by the state, Abbott said, citing the director of Texas’ Department of Public Safety.

The New York Times added that in 2012 Kelley was divorced in New Mexico from his first wife. When he was discharged from the Air Force in 2014, he remarried in Texas to Danielle Lee Shields.

A few months later he registered to vote in Colorado Springs — a city with several Air Force bases — listing his address as parking space 60 at a shabby collection of trailers in a gravel lot called the Fountain Creek RV Park.

Kelley’s in-laws and ex-wife were not in the town at the time of the shooting, the Times reported.