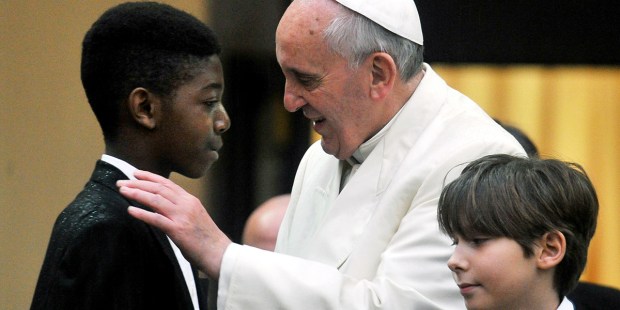 As centers where faith and reason dialogue, they can be a conscience for the world, he says.

Pope Francis has proposed that Catholic universities have a particular role to play in understanding and dealing with the phenomenon of migration.

On Saturday, the Holy Father granted an audience to participants in a conference organized in Rome at the Pontifical Gregorian University regarding the responsibility of Catholic universities in the face of the phenomenon of forced migration.

Catholic Universities, Francis said, seek to bring faith and reason into dialogue, seeking to harmonize scientific and theological investigation. Thus, scientific research regarding the phenomenon of migration and its consequences should be the basis for deeper theological reflection on migration “as a sign of the times.”

The pope expressed the desire that, through this reflection, they provide a solid rational framework for the pastoral care of migrants and refugees.

Inasmuch as they are centers of teaching, the pope continued, universities should facilitate the participation of refugees in education. This could be done through offering distance learning, providing scholarships, or recognizing the studies and academic degrees of migrants.

Universities should also train people to carry out pastoral work with migrants; more in general, they should teach all their students—some of whom will be leaders in politics, business, and culture—to understand the phenomenon of migration “from a perspective of justice, of global co-responsibility, and of communion in cultural diversity,” Francis stated.

In addition to investigation and teaching, the Bishop of Rome said, universities have a third role: that of being a “conscience” critical of the various forms of political, economic, and cultural power. Consequently, he called the leadership of Catholic universities to make their establishments play an important role in the realm of social action. One example would be the promotion among their students of voluntary work with refugees and migrants.