Successful programs involving refugees do exist. Here are some of them 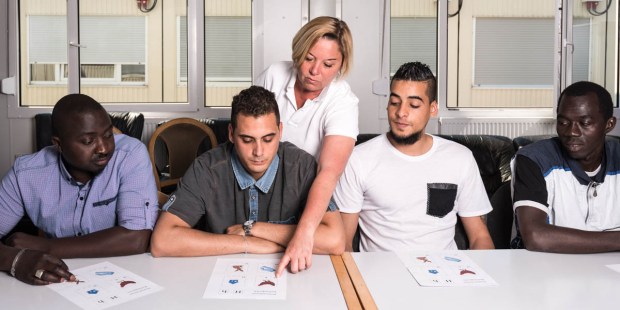 Positive stories of refugees make it to the realm of higher education.

Successful programs involving refugees do exist. In the face of the current refugee crisis, the response of Catholic universities around the world—more than 200 hundred of which are members of the IFCU (International Federation of Catholic Universities)—has been positive and effective, as was demonstrated at the Pontifical Gregorian University of Rome, November 1-4, during a conference on the matter. This is “a sign of hope,” the organizers say.

Welcome, stability, opportunities, social responsibility, identity, vulnerability, challenge, and integration are some of the key words most heard during the event, which had participants from Mexico, Iraq, Germany, the United States of America, the Holy See, Switzerland, Ireland, Australia, Chile, Lebanon, and France, among others.

This international conference, titled “Migrants and Refugees in a Globalized World: Responsibility and Responses of Universities,” was a joint effort of the IFCU, the Pontifical Gregorian University, Being the Blessing Foundation, and the Center for Interreligious Understanding.

Iraq stirred up a great deal of interest during the conference. Stephen Rasche, of the Catholic University of Erbil in Iraq, shared stories of his martyred land, and about how his mission has been to ensure that, as an institution of the Catholic Church, his university insists on the importance of offering people “hope and dignity as human beings.” He explained that it is “important to keep in mind the people who do not want to emigrate, nor be displaced, and who want to stay in their place and not leave.”

Rosalinda Corbi, of Harambee Africa International, after explaining success stories in Kenya and Nigeria regarding universities and their relationship with students, recognized that corruption is an enormous obstacle to launching programs, but in the face of this problem, her attitude is that “resisting helps you to be seen as a person who is different, and they respect you.”

Maryse Tannous Jomaa, of Saint Joseph University in Beirut (Lebanon), commented on the enormous pressure that the situation of migrants puts on her country: out of Lebanon’s six million inhabitants, more than one million are Syrian refugees. Dr. Jomaa described the many initiatives that her university is welcoming and promoting, ranging from polls among the students to determine their attitude towards refugees, to research programs with international institutes, or conferences that the Lebanese university offers all around the world to explain its position in this regard and the welcome it offers migrants.

An original proposal called The Silent University comes from Germany. Presented by Justin Fonkey and Kirsten Ben Haddou, The Silent University is an alternative platform for refugees and asylum seekers with an academic background. Its activities center on sustaining intercultural networks and channeling the talents of refugees who come from academic centers. It was begun in London by Kurdish artist Ahmed Ogut in order to share knowledge. You cannot graduate from this university; rather, it’s a platform that “aims to address and reactivate the knowledge of the participants, and make the exchange process mutually beneficial by inventing alternative currencies, in place of money or free voluntary service.”