The “side-hustle” mom: Why this new type of stay-at-home parenting is growing 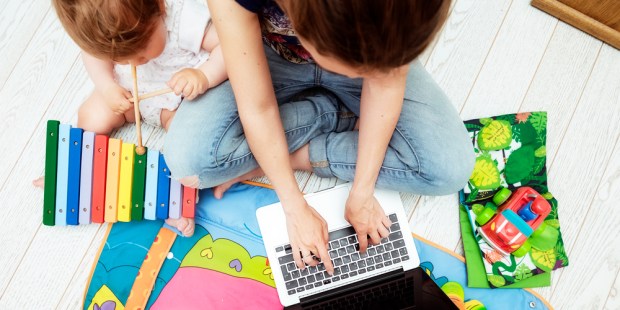 The line between staying home and working is getting blurrier and harder to draw.

Like many women, I’ve worked since I was 12 years old (grabbing any babysitting gig I could find), right up until I left a teaching career the week my first son was born. I’ve only taken a few breaks from “paid” work in college to focus on a demanding major. Work had always been a big part of my life, and then I abruptly quit to stay home with my new little boy.

Personally, I found that caring for a brand-spanking-new human was far more grueling work than I could’ve ever imagined doing at the office. Nevertheless, after my own newborn-induced fog cleared, I emerged, clear-eyed and hungry for meaningful work outside the four walls of my living room. Don’t get me wrong, I adore being home with my kiddos and know I am privileged to be in a position to do so, but as nap-times became more regular, I felt the itch to contribute to my family income once again.

Finding a meaningful way to work from home while still being a present and engaged parent has proved to be difficult at times. Starting out, I waded through countless scams and job postings that literally offered to pay me somewhere around $1 per hour or less. Now that I have found work in media, I sometimes struggle to draw the line between “work” and “home,” since most of my work is done at the kitchen table or on my couch (usually) after the kids have gone to bed. I’ve been determined to make it happen, though, to be at home with my kids full-time while still pursuing a career with excellence. Instead of going back to my career as a choir director and music teacher, I began exploring my first love — writing. It’s been almost a year since I’ve started freelancing as a writer, and I finally feel like I’m getting into my groove — and while it’s no easy feat, like millions of parents, I’m learning how to “lean in” both to my family and my work.

I’m not alone in my quest for work-life balance. Today’s economy is complex for families: two incomes are often necessary for survival, but the cost of childcare proves to be prohibitive … so one parent ends up staying home. But they aren’t staying totally home: They’re getting increasingly creative, finding all kinds of ways to earn while still caring for their kids all day. Call these moms and dads that new “side-hustle” parents.

A recent Redbook survey posed the age-old question: “What does a stay-at-home mom do?” The results were more complicated than dishes and diapers, to say the least. Among the moms they surveyed, 62 percent contribute to the household income.

In a quick post on my own Facebook page, more than 30 people responded that they are the main family caregiver in their home while also having (at least!) one “side hustle” or job that they do partly or completely from home. Moms are doing everything from coaching fitness teams to medical coding to using their minivans as Ubers on their very short “off” hours.

The line between staying home and working is getting blurrier and harder to draw. (Down with those silly “mommy wars”!) Almost every single stay-at-home mom in my own circle has some kind of business, blog or job they work furiously on as soon as those precious babies’ heads hit those pillows — and almost all of them earn at least some income.

In 2014, writer Alissa Quart and photographer Alice Proujansky produced a story for Pacific Standard magazine that noted that over 40 percent of Americans have “non-standard” work lives (outside of the traditional 9-to-5), and the average American now works one and a quarter jobs.

Plenty of moms who work full-time outside the home are getting creative, too, with shifted schedules—they trudge to the office long before anyone is awake, work a full day and then head home at school pick-up or lunch time to spend the remainder of the day caring for their family. Some moms and dads who work a traditional 9-to-5 are also taking on part-time jobs on evening and weekends—side hustles are not just for the primary caregivers.

Staying home and bringing home the bacon … at the same time

My own informal Facebook survey certainly reflected this trend of piecing together an income based on exactly what works for each individual family. Many times it involves working more than full-time when all is said and done. One of the most curious things I found were the moms (and dads!) on Facebook who classified themselves as the “stay-at-home” parent, while in the same sentence adding that they worked two or three part-time jobs!

The words “stay-at-home mom” have different connotations depending on who you’re talking to, but it hardly seems suitable to describe the work being done by so many. It seems as if the term is a sort of “catch-all” for millions of women contributing to their home in all kinds of significant ways, be it nursing a newborn, caring for school-age kids while scurrying to work for those few available hours, or mothering while simultaneously running the family business from their kitchens—all equally valuable pursuits.

Whether a parent stays home all day tending to the home and kids, or heads to the office before the sun is up, or logs a few hours of paid labor during nap time, goodness knows we’re all working hard to keep everything afloat. I was surprised by many of my friends’ responses to my Facebook query—I had no idea so many of my fellow stay-at-home moms were, like me, moonlighting during our children’s sleeping or school hours.

And a huge shout-out to those moms who not only rock it at home and the office, but put in extra hours doing that thing they love, hustling on the side. No matter what we’re doing or who we’re caring for, we all deserve support from each other, stay-at-home, work-at-home, work-out-of-the-home, and all the tricky combinations we’ve created to work for ourselves.

Read more:
The one big thing missing from the stay-at-home mom debate