Heroes of the cloth: Marveling at the stuff our priests are made of 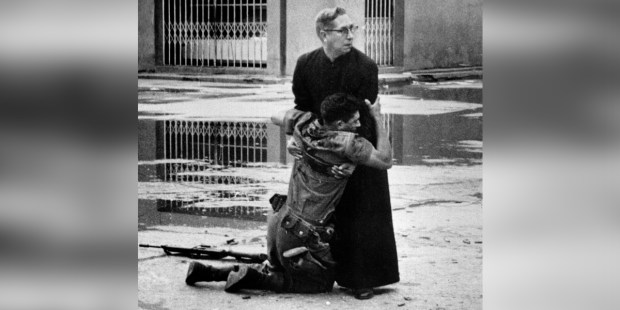 Catholic priests are human and fallible, like everyone. But sometimes they’re outright heroes.

Fr. John Patrick Washington, one of the “Four Chaplains” of diverse traditions who were last seen praying together, arms locked, on the deck of the doomed WWII troop transport ship, the USS Dorchester.

Washington’s memory instantly begs me to recall St. Maximilian Kolbe, the brilliant Franciscan priest who died at Auschwitz after volunteering to take the place of a man with a family:

In July 1941 a man from Kolbe’s barracks vanished, prompting SS-Hauptsturmführer Karl Fritzsch, the deputy camp commander, to pick 10 men from the same barracks to be starved to death in Block 13 (notorious for torture), in order to deter further escape attempts. (The man who had disappeared was later found drowned in the camp latrine.) One of the selected men, Franciszek Gajowniczek, cried out, lamenting his family, and Kolbe volunteered to take his place.

During the time in the cell he led the men in songs and prayer. After three weeks of dehydration and starvation, only Kolbe and three others were still alive. Finally he was murdered with an injection of carbolic acid.

Kolbe’s murder puts me in mind of Bishop Oscar Romero, who was assassinated at the altar in the midst of political upheaval. This is the man who dared challenge all priests, and all of us, too:

“A church that doesn’t provoke any crisis, a gospel that doesn’t unsettle, a Word of God that doesn’t get under anyone’s skin, what kind of gospel is that? Preachers who avoid every thorny matter so as not to be harassed do not light up the world.”