7 Take-aways from Pope Francis’ talk on nuclear weapons: There’s a light of hope 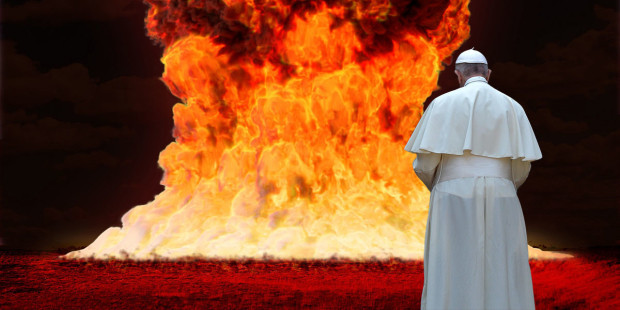 Integral human development, solidarity, subsidiarity … we can get to a world free of the threat of mass destruction.

Here are seven excerpts from the address Pope Francis gave today to an international symposium on disarmament and development. The two-day event has been organized by the Dicastery for Promoting Integral Human Development.

The full text can be read here. Emphases in bold are our own.

[Nuclear devices] exist in the service of a mentality of fear that affects not only the parties in conflict but the entire human race.

Weapons of mass destruction, particularly nuclear weapons, create nothing but a false sense of security. They cannot constitute the basis for peaceful coexistence between members of the human family, which must rather be inspired by an ethics of solidarity.

Weapons that result in the destruction of the human race are senseless even from a tactical standpoint.

A healthy realism continues to shine a light of hope on our unruly world.

The Encyclical Letter Populorum Progressio of Pope Paul VI […] in developing the Christian concept of the person, set forth the notion of integral human development and proposed it as “the new name of peace.”

We need, then, to reject the culture of waste and to care for individuals and peoples labouring under painful disparities through patient efforts to favour processes of solidarity over selfish and contingent interests.

Progress that is both effective and inclusive can achieve the utopia of a world free of deadly instruments of aggression, contrary to the criticism of those who consider idealistic any process of dismantling arsenals.