If you don’t like ‘Thor: Ragnarok,’ blame St. Boniface 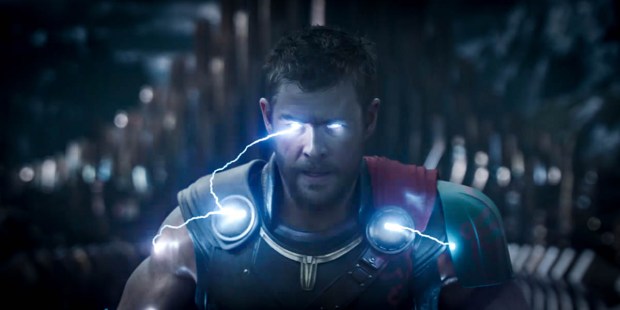 Thor, god of thunder, champion of the Aesir, rider of goats! He was pretty popular amongst the ancient Nordic people, at least until Christians started showing up in their region. To begin with, there was the obvious conflict with that whole First Commandment thing. But there was also the matter of the human sacrifice that often accompanied Thor worship. That kind of thing didn’t sit too well with the teachings of Jesus at all.

So it was that, sometime in the mid-700s, a bishop by the name of Boniface traveled to the small village of Geismar to put an end to the gruesome practice. There, the future saint stood before the Thunder Oak, the ceremonial oak tree consecrated to Thor which the locals claimed the Christian God was powerless to destroy. Boniface made short work of chopping the tree down, after which the flabbergasted villagers quickly converted.

The cult of Thor would stick around for a few more centuries, but the incident with Boniface was the beginning of the end. These days, tales of the hammer-wielding deity are considered little more than fairy tales, made-up narratives that embody the idealized archetypes and worldview of the culture from which they sprang. In fact, since the historical reality of the worship of Thor (unlike that of Jesus) no longer has any bearing on present day reality, modern day storytellers can pretty much do whatever they want to with him and it doesn’t really matter.

All of that is a long way of saying that if you don’t like Thor: Ragnarok, blame St. Boniface, because the thunder god we get in Marvel’s new movie bears little resemblance to the Thor of old. Oh sure, there’s still a hammer, a rainbow bridge, and all that other operatic stuff. Now, however, there are also Asgardians riding spaceships through Einstein–Rosen bridges, gladiatorial death matches on alien planets, and Jeff Goldblum playing Jeff Goldblum saying things in the most Jeff Goldblum way possible.

The movie begins with Thor (Chris Hemsworth ) in chains, having been captured by the fire giant Surtur while searching for the Infinity Stones. If you don’t understand that sentence, go back and watch the last 10 or so Marvel movies to get caught up. Thor makes his escape, but decides to stick around and steal Surtur’s crown, as the loss of this item will prevent Surtur from unleashing Ragnarok, the Asgardian version of the Apocalypse. This leads to a rather nifty battle between Thor and Surtur set to the strains of Led Zeppelin. Sure, it’s not very true to the source material, but the combination of music and imagery is guaranteed to bring a smile to anyone who used to peruse classic heavy metal album covers back in the day.

Upon returning to Asgard with his trophy, Thor quickly ferrets out Loki (Tom Hiddleston), who has been disguised as Odin (Anthony Hopkins ) for quite some time. Again, go back and watch all the previous films if none of this sounds familiar. As always, Loki’s deceptions have their costs. Odin’s absence allows Hela (Cate Blanchett), the all-powerful goddess of death, to return to Asgard where, true to her title, she promptly murders half the population.

As for Thor and Loki, they are sent spiraling to the far side of the universe to the planet Sakaar. There, the cosmic entity known as the Grandmaster (Jeff Goldblum) presides over the Contest of Champions, a never ending fight to the death in which the current champion is none other than the Hulk (Mark Ruffalo). Don’t worry, the movie explains how he got there. No previous movies required.

As like draws like, Loki immediately hits it off with the Grandmaster. Thor, on the other hand, is conscripted by the expatriate Asgardian bounty hunter Valkyrie (Tessa Thompson) and forced to compete in the contest against you know who. While all of this is transpiring, Hela, along with her new lieutenant Skurge (Karl Urban), makes plans to enslave all of the nine realms, including Earth.

There’s actually a lot of plot going on in Thor:Ragnarok, which is surprising considering the movie primarily exists for two reasons. One, get the characters set up for the upcoming Avengers: Infinity War, and two, let the actors have some fun. It has been widely publicized that Hemsworth was growing bored with the Wagnerian storylines of the Thor series and wanted to flex his comedic muscles a bit more. In Thor: Ragnarok, he gets his wish and then some as the movie is more comedy than anything else. With its ragtag group of misfit champions stranded on a distant planet where neon colors are the decoration of choice, the picture is basically a mishmash of Guardians of the Galaxy and Dino De Laurentiis’ Flash Gordon.

And that’s okay. Other than a few missteps, such as the completely unnecessary deaths of a few supporting characters, Thor: Ragnarok functions as a perfectly enjoyable piece of popcorn filmmaking. There is a little bit of advancement in the characters of Thor and Loki in terms of maturity, but it’s perfunctory. The movie exists primarily to entertain, and that it does. Hemsworth is funny, he and Ruffalo are funny together, and Goldblum … well, the whole film could have been just Goldblum walking around spouting Goldblum-isms and it would have been just fine.

No, this isn’t the Thor of legend. Heck, it’s hardly even the Thor dreamed up by Stan Lee (who makes his obligatory appearance) and Jack Kirby back in the 60s. But, as noted, Thor isn’t Jesus, so who cares what they do with him as long as it’s entertaining. Which Thor: Ragnarok is. Thanks for helping make that possible, St. Boniface.