Monty Python on why Michelangelo didn’t paint ‘The Last Supper’ 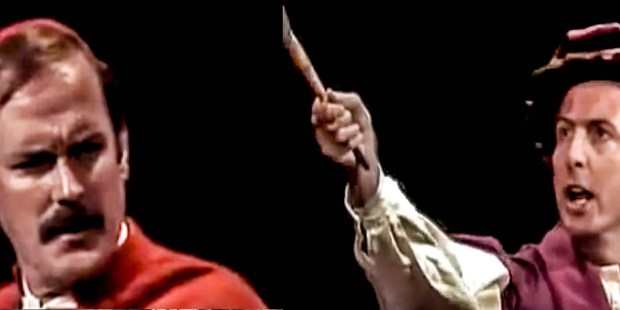 Michelangelo didn’t paint “The Last Supper”– Leonardo da Vinci did. But the comedy troupe Monty Python has a little fun imagining Michelangelo trying out for the job and decidedly not getting it.

Performed on stage in 1982, the sketch has a displeased pope taking Michelangelo to task over the creative license he took painting the scene of the Last Supper of Jesus.

For one thing, the pope tells the artist, there are 28 disciples in his painting:

Pope: Well of course it’s too many!

Michelangelo: Well in a way, but I wanted to give the impression of a huge get-together, you know. A real Last Supper, not just any old supper, but a proper final treat, a real mother of a blow-out.

Pope: There were only twelve disciples at the Last Supper.

Michelangelo: Well supposing some of the others happened to drop by.

You get the idea, enjoy!