The liturgical connection between Veterans Day and St. Martin’s Day 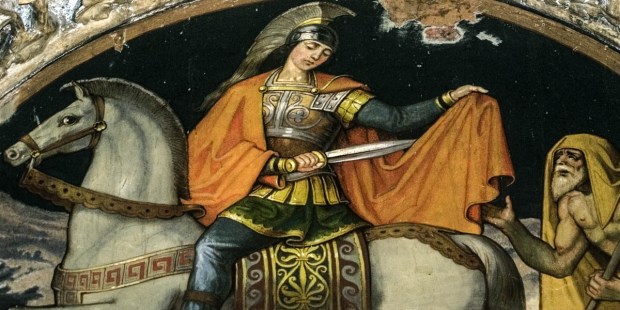 The patron saint of soldiers is honored each year on the same day as Veterans Day.

World War I ended on November 11, 1918, when an armistice with Germany was signed, creating an immediate ceasefire. The “War to End All Wars” ended on that day and it began a new chapter in Europe, hoping that peace would prevail.

The yearly anniversary of the day would later, in 1938, be ratified in law as a legal holiday and was intended to be “a day to be dedicated to the cause of world peace and to be thereafter celebrated and known as ‘Armistice Day’ … primarily a day set aside to honor veterans of World War I.” By 1954 the holiday was widened to include all veterans and became known simply as “Veterans Day.”

What’s interesting is how Veterans Day, a day dedicated to soldiers, falls each year (unless it falls on a Saturday or Sunday) on the day in the Church’s calendar honoring St. Martin, patron saint of soldiers.

St. Martin was a Christian Roman soldier of the 4th century, who was part of a cavalry unit stationed in France. He served in the military for many years, but at a certain point was convinced that he longer should shed blood and instead work for peace. St. Martin famously said to his commander, “I have served you as a soldier; now let me serve Christ. Give the bounty to those who are going to fight. But I am a soldier of Christ and it is not lawful for me to fight.”

He later became a bishop and served the Church for many years before dying on November 8, 397. The feast celebrating his life has been commemorated on November 11 for centuries and Martin has always been known as a strong intercessor for soldiers.

The fact that Germany laid down its arms on a day in the Church’s calendar that celebrates a saint who laid down his arms, choosing a life of peace rather than war, may seem like a remarkable coincidence. But the armistice timing was chosen deliberately — scheduled for the eleventh hour of the eleventh day of the eleventh month. For centuries, St. Martin’s Day (also known as Martinmas) had marked a time of new beginnings in Europe — a new school term, the first day of rental agreements, and the date when debts were paid. What better day to mark a new beginning of peace?

Was St. Martin behind it all, interceding for the end of World War I? Or was that part just a “coincidence”? Heaven only knows.

Read more:
4 Saints who served in the military