On Veteran’s Day, we Knights of Columbus salute these brother Medal of Honor recipients 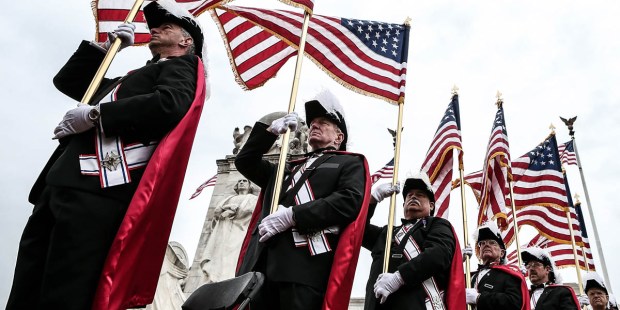 The four tenets of the Knights of Columbus are Charity, Unity, Fraternity and Patriotism.

The Knights of Columbus officially became a fraternal Catholic society on March 29, 1882. Founded by Father Michael McGivney and some of the parishioners at St. Mary’s Church in New Haven, Connecticut, the organization was started for the purpose of providing aid, both spiritual and corporal, to members and their families. Most of them at the time were poor immigrants.

Today the Knights of Columbus have grown from a few members, who had their first meeting in the basement of St. Mary’s, to an organization that is the largest Catholic fraternal order in the world with 15,342 councils and almost 2 million members spread around the planet.

The four tenets of the Knights of Columbus are Charity, Unity, Fraternity and Patriotism. Since it is Veteran’s Day in America, this article will focus on Patriotism. Members of the Knights call each other “Brother.” We are Brother Knights (myself included) and the following Brother Knights exemplified their Patriotism above and beyond the call of duty. They were all recipients of the Congressional Medal of Honor.

Read more:
Why are the Knights of Columbus named after a controversial explorer and not a saint?

Marine Sergeant Daniel Joseph Daly (1873-1937): Awarded the Medal of Honor TWICE; in 1900 he received his first Medal of Honor during the Boxer Rebellion. He single-handedly repelled repeated attacks on his position while inflicting close to 200 casualties. His second Medal of Honor came during the Battle of Fort Dipite in Haiti as he led 35 of his men against a force of 400, managing to get his men and himself to a nearby fort. Sergeant Daly was a member of  Knights of Columbus Council #472 in Middle Village (Queens), New York.

Father (Major) Charles J. Watters (1927-1967): On November 19, 1967, during a battle near Dak To in Vietnam, Chaplain Watters, unarmed and without regard for his own life, tended to the wounded and dying while in close combat. He persevered in his mission until he lost his own life in the battle. Major Watters was a member of Knights of Columbus Council #1638 in Rutherford, New Jersey.

Major General Patrick Brady (1936—age 81): General Brady did two tours of duty in Vietnam. The first was from 1964 thru 1965 when he piloted a Medical Helicopter Ambulance. During his second tour, from 1967 to 1968, Brady was second in command of the 54th Medical detachment. It was during this time that he was awarded the Medal of Honor. Into thick fog and heavy gunfire Major Brady flew four separate times to rescue seriously wounded men. He wound up using three different helicopters during the course of the day and rescued 51 wounded men. He retired as a Major General in 1993. The General is a member of Knights of Columbus Council #11948 in Tacoma, Washington.

Captain Gary Michel Rose (1947—age 70): Captain Rose (at the time Sergeant Rose) was a member of the 5th Special Forces Group (Airborne). On September 11, 1970, Sergeant Rose and a company of soldiers were sent behind enemy lines in Laos. The men moved deeper into enemy territory and came under intense fire. Sergeant Rose crawled from man to man treating the wounded and dying without regard for his own safety. Hit by shrapnel in his legs and feet, he continued on using a stick as a crutch while treating the wounded. Captain Gary Rose is a member of Knights of Columbus Council # 11672, Huntsville, Alabama.

Father (Captain) Emil Kapaun (1916-1951): Emil Joseph Kapaun was a Catholic priest who served as a chaplain in World War II and in Korea.  He was declared a Servant of God by Pope St. John Paul II in 1993. He was awarded the Medal of Honor for action in Korea in 1950. During the Battle of Unsan in 1950, Chinese troops entered the war and overwhelmed the 3rd Battalion, 8th Cavalry. The prisoners (including Father Kapaun) were marched 87 miles to a makeshift prison camp. He was the unifier and morale keeper at the camp. He would dig latrines, give away his meager rations, and talk to and counsel the prisoners, doing his best to keep their spirits intact. He was also the one who insisted on “stealing” tea and other scraps of food so the others would not get caught and executed. He even smuggled medicines to the doctor among them, Sidney Esensten. Captain Chaplain Emil Kapaun  was member of Knights of Columbus Council,#3423 in Pilsen, Kansas. Knights of Columbus Council # 14218 in Fort Riley, Kansas, is named in his honor. Emil Kapaun Knights of Columbus Assembly 2711 in Katy, Texas, is also named after him as is Fourth Degree Assembly 3260 in Vail, Arizona.

Father McGivney died at the age of 38 when the K of C organization was only eight years old. In 1996 he was declared a Servant of God and his cause for sainthood was sent to Rome. In March of 2008, Pope Benedict XVI declared Father McGivney Venerable, in recognition of his “heroic virtue.” The next step in the process will be beatification.

Brother Knight Venerable Michael McGivney, please pray for us all.

Read more:
Father Emil Kapaun, the saint in the foxhole