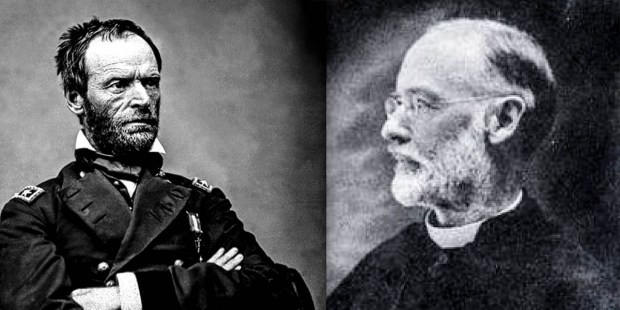 It’s not clear that Sherman ever fully forgave his son for joining the Society.

In the spring of 1878, General William T. Sherman opened a letter from his oldest son Thomas, a young man for whom he held great hopes. At 22, Tom had studied at Georgetown and Yale, and had graduated from law school. Sherman envisioned a bright future for Tom, one which would ensure the family’s security. The letter, however, left him shocked, distressed, even furious.

Tom wrote that he wasn’t going to continue as a lawyer, but was joining the Jesuits that summer. The General told Tom in no uncertain terms that he had betrayed him, his sisters and mother, who looked to him for support in their old age. (He always felt his army salary didn’t go far enough.) It’s not clear that Sherman ever fully forgave his son.

While Mrs. Sherman, a devout Catholic, was overjoyed, her husband held a lifelong skepticism toward religion in general and Catholicism in particular. Born Tecumseh Sherman to Protestant parents, he was orphaned early and raised by Catholic neighbors who insisted on his being re-baptized. His baptism occurred on June 28, 1829, the feast of St. William, and he was renamed William Tecumseh.

But as his biographer John Marszalek notes, Sherman “refused to call himself a Catholic or practice that creed.” Yet his children were all raised Catholic. Ellen Sherman actively supported Catholic causes, numbering many priests, bishops and even cardinals among her close acquaintances. The General, however, frequently berated what he called her “unnatural fascination for the Church.”

Born on October 12, 1856, Thomas Ewing Sherman was the grandson of one United States Senator and the nephew of another. His father, a central figure in the American Civil War, served for two decades as commanding general of the U.S. Army. Raised in Washington, D.C., among the nation’s political elite, through his mother Tom was on intimate terms with the country’s leading Catholics.

Priests and bishops were frequent guests at the Sherman home. One family friend who made a strong impression on him was Father Peter DeSmet, a Belgian Jesuit who worked extensively with Native Americans. The General complained that Ellen “thinks religion is so important that everything else must give way to it.” He told young Tom: “I don’t want you to be a soldier or a priest but a good useful man.”

Nonetheless, it was while at Georgetown that Tom became seriously interested in the Jesuits, who ran the university. But he went on to study law at Yale. After graduation, he practiced law for two years in St. Louis. By 1878, he had made his decision to join the Jesuits. Although his father felt he was shirking his family duties, Tom wrote his sister Minnie:

People in love do strange things … Having a vocation is like being in love, only more so, as there is no love more absorbing, so deep and so lasting as that of the creature for the Creator. What a grand thing it is to be, as it were, shooting straight at one’s mark, living every hour, performing every action in preparation for the great hereafter.

The preparation program for the Jesuits can last up to a dozen years, and Tom started his novitiate, where he said his position “quite corresponds to that of a cadet in the army,” in England. Back in America, he studied philosophy and taught at St. Louis University, a Jesuit school founded in 1818. There he preferred public speaking to teaching, but he made a strong impression on his students, several of whom followed him into the Jesuits.

As the son of a leading national hero, Tom Sherman was something of a celebrity, a man set apart. In 1889, he was ordained to the priesthood, but in a separate ceremony from the rest of his class. His mother’s close friend, Archbishop Patrick Ryan of Philadephia, performed the ordination. The event was national news, and Father Sherman looked forward to a promising career.

While most Jesuits take up teaching or parish work after ordination, Sherman seems to have written his own ticket as a popular lecturer. His biographer Joseph Durkin writes that he “had a flair for the dramatic and an acute sense of the theatre.” One peer described him as “always hungry” for a podium. No doubt his name and background helped draw crowds.

And draw crowds he did. In time, however, he butted heads with his superiors, who felt that fame might be going to his head. Durkin describes him as “a high-strung individualist of an extreme refinement of nature and a disposition unusually sensitive.” Ordered to take a break from the lecture circuit, he went over his superiors’ heads to Rome, and got a leave of absence from the Jesuit order. During the Spanish-American War, he obtained a chaplain’s commission without consulting the Jesuits.

For several years, Sherman drifted from one Jesuit assignment to another until he suffered a nervous breakdown in his early 50s. Institutionalized for several years, he traveled around the country from one Jesuit community to another. “Having served in six provinces,” he wrote a friend, “I am attached to none.” In a fit of despair he wrote, “I am utterly at a loss what to do … no peace is possible for me.”

In the fall of 1914, Sherman formally withdrew from the Jesuits. For several years, unattached to any diocese or religious order, he wandered around the country before settling down in Santa Barbara, California, where family members looked after him. For much of this time, Durkin writes, he was “allergic to the mention of the word ‘Jesuit.'”

Just before his death at age 77, however, Father Thomas Ewing Sherman reconciled with the Jesuits and renewed his vows. After many years of unrest, General Sherman’s son died a Jesuit. He was buried in their cemetery at Grand Couteau, Louisiana. Interred next to him is Father John Salter, a nephew of Alexander Stephens, Vice President of the Confederate States of America.

Previously published online in 2011. Reprinted here by kind permission of the author.