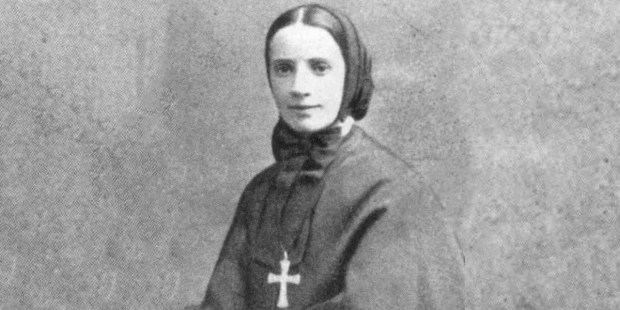 She very simply informed the bishop, “I have letters from the pope,” and she stayed.

Do not be satisfied with loving God by yourselves alone; make all those around you love him also, and pray that everyone will love Him. —St. Frances Xavier Cabrini

There have been a lot of things vying for our attention these past few weeks: the terror attacks in Las Vegas and Sutherland Springs, Halloween, All Saints/All Souls Days, and election day, to name but a few examples. When we add to this our day-to-day responsibilities, our faith can become more and more remote and the special days that pepper the Church’s calendar can seem quite insignificant or, perhaps, quaint, at best.

Certainly the saints can seem remote. Most of the saints—even the best known—have names that sound strange to our ears. It seems they lived centuries ago in places we will never visit. And yet, this week, we have the opportunity to reflect on a saint who is very close to us, not only in terms of when she lived her life, but where as well—here in the United States. But the life and witness of St. Frances Xavier Cabrini are even more important for us at this point in our country’s story because beyond being the first American citizen to be listed among the saints, she was also an immigrant and she is honored as the patron saint of immigrants. This December, we will mark 100 years since her death, and so we are celebrating a centennial year in her honor.

Born in Lombardy, Italy, in 1850, Frances dreamed of being a missionary in Asia and twice tried to enter a religious community, but she was refused because of her poor health. In time, she became a schoolteacher and dedicated her life to God through a private vow of virginity. In 1880, she received permission from her local bishop to bring together a group of women to form a new religious community for the Asian missions. Her hope was to establish a new community of sisters who would live out the virtues of humility and simplicity, while living a balanced life of prayer and service.

In 1887, the Congregation of the Missionaries of the Sacred Heart of Jesus was officially recognized by Pope Leo XIII. However, Mother Cabrini’s dream of serving the peoples of Asia was transformed after she met Blessed Giovanni Battista Scalabrini, a bishop and the founder of the Missionaries of St. Charles Borromeo (the Scalabrinians), who had been moved by the plight of poor Italians who were seeking a better life in America. Bishop Scalabrini encouraged Mother Cabrini to take her sisters to the “Little Italies” of the United States and serve the Italian immigrants who were barely surviving in cities like Boston and New York. Pope Leo XIII approved her request to travel to America to take on this special work.

Mother Cabrini and six sisters arrived in New York in 1889 but, despite their papal commission, they received little support from the local clergy. In fact, the archbishop of New York, who desperately wanted Italian priests, thought that the women were unsuited for work among the immigrant-poor and went so far as to tell Mother Cabrini that the ship that had brought them from Italy was still in the harbor and that they should return home on it because there was no need for her or her sisters.

She very simply informed the bishop, “I have letters from the pope,” and she stayed. Despite unspeakable hardships, including living in a tenement filled with cockroaches and bed bugs, the sisters immediately began ministering among the immigrants, teaching their children, visiting the sick, and feeding the hungry. With no support from the diocese or the well-established religious communities, these first Missionary Sisters of the Sacred Heart were supported by the Sisters of Charity and the Sisters of Bon Secours. Soon, however, they began to win the respect of the local community and it is reported that shopkeepers in Little Italy would give the sisters food as they passed by, providing the sisters with both a means of survival for themselves and additional resources to feed and clothe the poor.

Despite her petite stature (she was only 5 feet tall) and her limited English, Mother Cabrini was respected for her fierce sense of determination and her staunch belief that she was doing God’s will. After establishing her first orphanage in New York, she began to expand her community’s missions. She understood that she was called to serve the entire Italian community, and soon there were sisters working in Cincinnati, Pittsburgh, Buffalo, St. Louis, Denver, San Francisco, and New Orleans, operating orphanages and teaching in schools. Mother Cabrini would later open a series of hospitals in a number of other American cities.

In later years, Mother Cabrini extended her mission work to Latin and South America, where she established convents in Nicaragua, Panama, Argentina, and Brazil. By the time the Rule of the Missionary Sisters of the Sacred Heart was approved by Rome in 1907, Mother Cabrini’s sisters had also established houses in England, France, Spain, and, of course, Italy. That same year, Mother Cabrini became a naturalized citizen of the United States.

This holy woman, known for her warmth, humility, and practicality, collapsed while wrapping Christmas gifts on December 21, 1917; she died the next day. Frances Xavier Cabrini was canonized in 1946. There is a statue of Mother Cabrini in St. Peter’s Basilica in Rome and her liturgical memorial is celebrated November 13.

Sister Mary Louis Sullivan, a Missionary Sister of the Sacred Heart and biographer of Mother Cabrini, observed, “Mother Cabrini saw divine love epitomized in the person of Christ. Her particular devotion to the Sacred Heart of Jesus took the form of an adherence to the loving Christ … hers was a spirituality of love which drew her toward God by living a life of love of neighbor” (Deacon Digest Magazine, May 2012).

This devotion inspired her to cultivate a spirit of hospitality and generosity that knew no bounds. In the end, Mother Cabrini was able to do this because, for her, there was no stranger—everyone, regardless of their race or social class, was her brother or sister in Christ. Aware of the needs of immigrants in her own day, she reminds us that caring for the poor and outcast—especially those who are alone—is a fundamental facet of our Christian vocation.

Read more:
Immigrants and refugees: What the Church teaches