Why in-laws are more of a gift than a burden 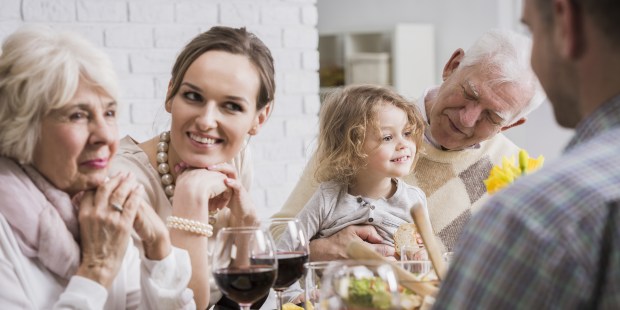 Although the in-law relationship can often be tense, here’s why you need to nurture it …

For centuries, the family-in-law has been the butt of many jokes, especially where mothers-in-law are concerned. From referring to them as the “out-laws,” “monster-in-law” or — if you’re lucky — “mom” or “dad,” many couples go through a myriad of problems and emotions when learning to deal with each other’s families. Yet, on the day of your marriage, when two families unite, the new family-in-law actually has a lot to offer — perhaps more than you may think.

In France, your family-in-law is referred to as the “belle-famille,” or “beautiful family.” Your mother-in-law becomes your “belle-mère,” or beautiful mother, a real proof of affection dating from the Middle Ages; in return you become a beautiful daughter, “belle-fille” or handsome son, “beau-fils” – great for self-esteem! Such words of warmth seem to automatically invite the members of this family, united in love, to create lasting bonds. So if we stop looking at the cold, legal aspect of being an “in-law” and look to our new family as being the beautiful gift from God it truly can be, perhaps our spouse’s family won’t feel like the burden that recent decades have portrayed it to be.

Yet, for those who aren’t convinced their in-laws are a blessing, or who don’t have the most harmonious relationship with their spouse’s family, we have a few more reasons to embrace the gift of this new family — even if it may sometimes require biting your tongue, saying a prayer, and having the ability to forgive and move on.

In-laws are a gift for our spouse, for ourselves, and for our children: Don’t neglect them!

Let’s say your parents-in-law live too far away to look after your kids on the weekend, they don’t have a vacation condo to lend you, your mother-in-law doesn’t offer you pots of homemade jam, and on top of that, you have no interests in common; this could leave you with nothing to say to each other, which makes for an awkward relationship. You might say to yourself that your in-laws are far from being a gift. But they are, and here’s why:

For your marriage. The fact that your family-in-law is different from your own is a priceless gift in itself. Marriage is a bit of a culture shock between two families who can vary from each other in any number of ways: socially, financially, geographically, culturally, or in their lifestyle. It is often through these differences that misunderstandings, frictions, or tensions arise. However, it is also thanks to these differences that a couple has the power to shape itself, picking and choosing family traditions from here and there, or deciding to abandon certain legacies.

If you think about it, who you are doesn’t just come out of nowhere. Each person is conditioned by their education, their family environment, and their childhood, and you can’t just erase that. Yet, part of being an adult is to extract from this conditioning the things that are good for both yourself and your spouse. Your in-laws are the guardians of your spouse’s family heritage, representing a whole new world of possibilities, from which a couple can create their own universe and develop their own values which they can hold dear. Therefore, your in-laws must have something good to offer; otherwise, you wouldn’t have chosen to marry their son or daughter!

For your children. By spending time with your in-laws, you are offering your children the great privilege of knowing half of where they come from. It gives them the opportunity to create close relationships with their grandparents, good memories with their cousins, and bonds with their aunts and uncles.

How to ensure this gift doesn’t become a burden

It’s so easy for your in-laws to fall into pitfalls that can endanger their relationship with you, and possibly your marriage itself: constant interference, criticism, manipulation, jealousy, indifference, or possessiveness. Before things get out of hand, it’s important to get a little distance and learn to communicate clearly and diplomatically.

Find the right distance. Since time immemorial, man has been pulled between two biblical commandments: “That is why a man leaves his father and mother and is united to his wife, and they become one flesh” (Genesis, 2 : 24), and “Honor your father and your mother“ (Deuteronomy, 5 : 16). Thank God these two demands are compatible, as cutting the umbilical cord doesn’t mean cutting all ties. Between the two there is an abundance of opportunities to find your rightful place, and define a healthy and balanced relationship that meets everybody’s wishes. However, it’s important to keep in mind that your marriage itself is paramount.

Learn to communicate. Communicating with your in-laws can be a very sensitive issue.  Firstly, because these two different tribes often don’t understand each other right away: any interest can be seen as interference, and discretion as indifference. Things can get tricky when you try to get a message across while maintaining family harmony. For this to work effectively, there are four keys: avoid any criticisms and accusations; say things in a constructive and positive manner; use humor; and in particular, if necessary, take a step back. If your mother-in-law points out your lack of organization or culinary skills, don’t over-dramatize the situation or feel guilty; there are plenty of other things you know how to do! Don’t reply with a scathing comment such as: “Have you seen yourself?!” Rather, acknowledge that you are disorganized or your cooking skills are limited, but that you and your family are happy as you are.

When relationships get complicated, draw on your desire to love, and learn to forgive.

Sometimes situations are such that it can seem impossible to love, or even rub shoulders with, your in-laws. This can be a sister-in-law who is unhealthily jealous, or a mother-in-law who doesn’t mutter a word to her daughter-in-law (or even pretends she doesn’t exist) or who never thinks her son-in-law is good enough for her “princess,” or a father-in-law who is suddenly invasive since becoming a widower. In these cases your path to holiness is truly mapped out! The only option that remains is to understand and accept the psychological twists and turns that lead people to behave in these inappropriate, mean, or aggressive ways … and forgive them.

Sometimes, we just need to give it time. A mother- or father-in-law who doesn’t accept you at first may, years later, come to recognize that you truly make their son or daughter happy. You may even end up helping provide care for one of your spouse’s elderly parents, and your generosity in that situation may soften their heart. And, of course, prayer for the entire family—our own and our spouse’s—is a must. With time, and a good measure of humility, kindness, and patience, family bonds can be built (or rebuilt), and the gift of an expanded family which we received on the day of our marriage will show its true value.

Read more:
How to stay on good terms with your in-laws

Read more:
5 Keys to enjoying (not just enduring) your in-laws over the holidays