What does the word “Eucharist” mean? 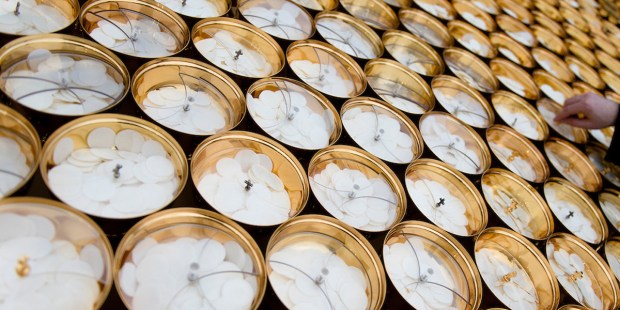 The word isn’t of English origin, and has many different levels of meaning.

One of the most used words in Catholicism is the word “Eucharist.” It’s heard every Sunday at Mass and Catholics use it all the time. What does it mean?

The Catechism of the Catholic Church offers a brief definition of the word.

The inexhaustible richness of [the sacrament of the eucharist, i.e. the “Mass”] is expressed in the different names we give it. Each name evokes certain aspects of it. It is called:

Eucharist, because it is an action of thanksgiving to God. The Greek words eucharistein and eulogein recall the Jewish blessings that proclaim — especially during a meal — God’s works: creation, redemption, and sanctification. (CCC 1328)

In the original Greek version of the Gospels, Jesus is recorded using a similar word while celebrating the Last Supper.

Take this, and divide it among yourselves … And he took bread, and when he had given thanks [εὐχαριστήσας – eucharistēsas] he broke it and gave it to them (Luke 22:18-19).

Essentially, the word “Eucharist” means “giving thanks,” but in a Jewish context is directed specifically towards giving thanks to God.

Early on the word was adopted to refer to the entire sacrament of the Eucharist, more commonly known as the Mass, where Catholics celebrate God’s saving act on the cross. There is even an ancient document called the Didache that possibly dates to the time of the apostles and uses this word in this context.

Celebrate the Eucharist as follows: Say over the cup: “we give you thanks, Father, for the holy vine of David, your servant, which you made known to us through Jesus your servant. To you be glory for ever.”

Over the broken bread say: “We give you thanks, Father, for the life and the knowledge which you have revealed to us through Jesus your servant. To you be glory for ever” … Do not let anyone eat or drink of your Eucharist except those who have been baptized in the name of the Lord.

Besides referring to the entire celebration of the Eucharist, the word is also used even more specifically to refer to the bread and wine that are transformed into the body and blood of Jesus.

So the word “Eucharist” is a multi-faceted word with many different dimensions, all going back to the basic human need of giving thanks to God.