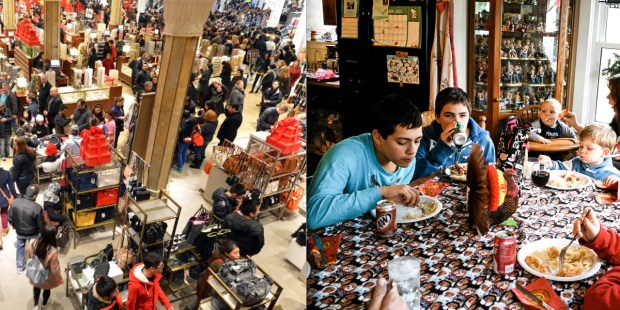 People who live in Western, Educated, Industrialized, Rich Democracies are very different from most of the world.

Q: Why Do We Prefer Black Friday to Thanksgiving?

A: Because we are WEIRD — Western, Educated, Industrialized, Rich and Democratic

It’s undeniable. The great family holiday of Thanksgiving is losing ground, fast, to “Friendsgiving” get-togethers while “Black Friday” shopping gets bigger and earlier.

Why do we prefer Black Friday to Thanksgiving?

Social psychologist Jonathon Haidt writes in his book The Righteous Mind about “WEIRD” people — the people who live in Western, Educated, Industrialized, Rich Democracies who are very different from most of the world, and yet we are used by most psychological research studies to stand for all of humanity.

Haidt compared “weird” people to typical people elsewhere. “When asked to write 20 statements beginning with the words ‘I am,’” he said, “Americans are likely to list their own internal psychological characteristics (happy, outgoing, interested in jazz), whereas East Asians are more likely to list their roles and relationships (a son, a husband, an employee of Fujitsu).”

Maybe in our history Americans were more connected to others. We aren’t now.

“Several of the peculiarities of WEIRD culture can be captured in this simple generalization: The WEIRDer you are, the more you see a world full of separate objects, rather than relationships,” writes Haidt.

To a “weird” person, Thanksgiving is a colossal waste of time. We each want to maximize our self-actualization through pleasure, personal enrichment, or career advancement. Thanksgiving meets none of these goals. Instead, it forces us to spend too much time with the wrong people for the wrong reasons.

Black Friday, on the other hand, is easy

Perhaps it is a mark of how weak our relationships are that one recent study suggested that 7 in 10 Americans would give up holiday gift giving if they could.

If Thanksgiving taxes and frustrates us, a Black Friday spree leaves us triumphant: We did it. We’re done. We can relax.

So what’s wrong with Black Friday? And why bother with Thanksgiving?

In other words, what’s wrong with being “weird”? The answer is increasingly clear: Without strong relationships we risk falling prey to the growing epidemic of social isolation.

Feeling alone in the world poisons everything: It makes our stress levels rise, leads us to seek escape in alcohol and drugs. It convinces women that abortion is their only solution, it drives men to seek solace in pornography, it causes teens in our day to commit suicide in record numbers.

“The magnitude of risk associated with social isolation is comparable with that of cigarette smoking and other major biomedical and psychosocial risk factors,” says a study the newest edition of the journal Psychosomatic Medicine.

It’s a vicious cycle, Pope Francis points out. “The emptier a person’s heart is, the more he or she needs things to buy, own and consume,” he wrote (Laudato Si, 204).

We can’t be human without community

That is because to deny our relationships is to deny the very thing that makes us human.

Haidt said studying different cultures taught him to value what religion gives us: “It’s the friendships and group activities, carried out within a moral matrix that emphasizes selflessness. That’s what brings out the best in people.”

Pope Francis calls the family the place “where we learn to live with others despite our differences and to belong to one another.”

That means Thanksgiving’s greatest weakness is its greatest strength

The efforts we make to build a family life despite the undesirability of our own family do wonders for us.

Thanksgiving fills our senses: We smell food, we see the spread, we see the people, and then we sum all of those senses up in a statement of gratitude. We see the whole breadth and depth of our family at one place, celebrating the family itself. We see the older ones who need our help, the younger ones with so much to offer, and we find our place and our path forward.

Thanksgiving helps us become part of something bigger than ourselves, and we become more accountable to others.

In short, it makes us a little less “weird.”