Christ is King and we are citizens of his Kingdom 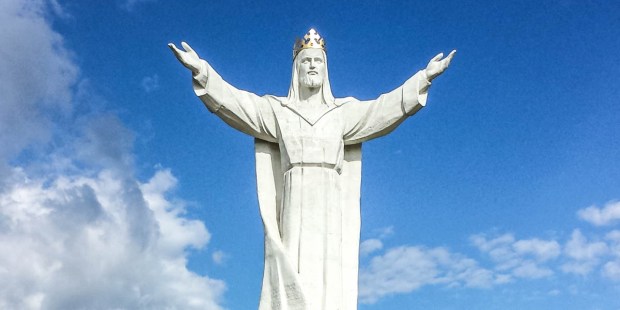 “He will place the sheep on his right and the goats on his left.
Then the king will say to those on his right,
‘Come, you who are blessed by my Father.
Inherit the kingdom prepared for you from the foundation of the world.”

Although the annual celebration of the Solemnity of “Christ the King” has been part of the life and prayer of the Catholic Church for many years, not too long ago I had an opportunity to experience this celebration in a very different context: with a Protestant community celebrating “Reign of Christ” Sunday. Their observance of this day offered a new perspective on this feast and what it might mean for us, particularly in these post-election days when our nation, communities, and families seem more divided than ever before.

And so, to help us have a better sense of what this Sunday’s celebration is all about, I think it’s important for us to consider the history of the feast, and the reasons that we have a special day dedicated to the Universal Sovereignty of Christ as part of our liturgical calendar.

When Pope Pius XI instituted a special feast honoring Christ “the King” in 1925, he was grieving for a world that had been ravaged by the First World War and which had begun to bow down before the “lords” of exploitative consumerism, nationalism, secularism, and new forms of injustice. The old power structures in Europe and the Middle East were fading into memory (including the colonial system that allowed European nations to claim lands in Africa, Southeast Asia, and South America). A new and uncertain world was rising.

Pope Pius recognized that, for the Christian, those passing empires and colonies did not define who or whose they were. Instead, he reflected that the kingdom to which Christians belong is “spiritual and concerned with spiritual things… it demands of its subjects a spirit of detachment from riches and earthly things, and a spirit of gentleness. They must hunger and thirst after justice and more than this, they must deny themselves and carry the cross” (from the Encyclical Quas Primas, 15).

Pope Pius envisioned “a dominion by a King of Peace who came to reconcile all things, who came not to be served but to serve.” (20) As the First Reading this Sunday reminds us, “As a shepherd tends his flock when he finds himself among his scattered sheep, so will I tend my sheep” (Ezekiel 34:12). What a comforting vision, as we grapple with the reality of violence and fear, along with questions about what we owe to those who are the victims of terror and oppression.

While the image of the shepherd found in the readings for the Solemnity seems familiar to us, the notion of a “king” is fairly foreign to most people in our world today. In fact, there are fewer than 30 sovereign monarchs in the world today. And yet, in our parishes and religious communities, many of us will sing great hymns like “To Jesus Christ Our Sovereign King” and “Crown Him with Many Crowns.” By limiting the focus of this feast to the kingship of Christ, however, we risk losing the broader view of what we are really celebrating today: our citizenship in the Kingdom of God. And the message that we hear today is that we can no longer identify simply ourselves as “American,” “Navajo,” “Haitian,” “Italian,” “Sudanese,” or “Thai.” We have been claimed by and for Christ in our baptism and our true home is in the Reign of Christ—a reality that surpasses the limits of boundaries, ethnicities, and even time itself. We are co-citizens of God’s Kingdom, with all the Communion of Saints.

In the end, this Sunday’s celebration of Our Lord Jesus Christ, King of the Universe reminds us that the Kingdom of Christ isn’t some far off reality. We are living in that Kingdom now. And, as our Gospel reminds us, we are being called to demonstrate this through our care for the poor, the hungry, the outcast—all of those on the margins who take the place of Jesus in our world today. It is only by imitating the humility and compassion of our thorn-crowned King that we can help bring relief to those who suffer — and God’s healing mercy to those who long for forgiveness — helping to proclaim the Good News of the Reign of Christ in the world today.

What does it mean for you to be a citizen in the Kingdom of Christ?

How are you being called to promote Pope Pius’ vision of the Reign of Christ in the world today?

This Sunday’s Gospel reminds that loving compassion must be defining qualities of the members of Christ’s flock. How do you witness to your faith in caring for the needs of others?

Words of Wisdom: “Jesus in Galilee was not teaching a religious doctrine for his listeners to learn and follow. He was proclaiming an event, so could accept it joyfully and faithfully. No one saw him as a teacher devoted to explaining the religious traditions of Israel. They knew a prophet with a passion for a fuller life for everyone, who only wanted people to embrace God, so that God’s reign of justice and mercy would become ever wider and more joyful. His goal was… to hasten the coming of the long-awaited reign of God, which meant life, justice and peace.”—José A. Pagola, Jesus: An Historical Approximation