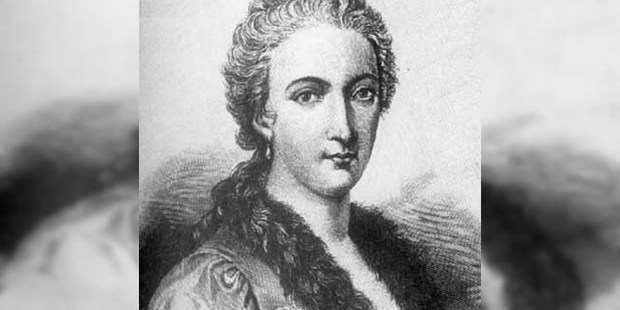 This 18th-century prodigy was an intellectual of staggering brilliance, and a faithful Catholic servant of the poor.

Because the Church ordains only men to the clergy, she is often called “sexist,” but to make such a claim is to misconstrue both the teachings of the Church and history. A valid argument can be made that Christianity emancipated women from the truly sexist standards of pagan antiquity — where women (and children) were treated as chattel owned by men. The Christian standard for husbands is to love their wives as Christ loved the Church, to the point of sacrificing His life (Ephesians 5:25).

Catholicism has always held up women like Mary, the Mother of God, Saint Mary Magdalene and countless others as exemplary models of both faithfulness and strength and was until modern times the only institution willing to give women their heads and let them run with their ideas, in order to answer the call of God. Among these notable women is Maria Agnesi, the first woman to write a mathematics textbook and to be appointed a university mathematics professor.

Maria Gaetana Agnesi (16 May 1718 – 9 January 1799) was the eldest of 21 children in a wealthy Milanese family – her father remarried twice after her mother’s death. Maria’s father Pietro Agnesi was a wealthy silk merchant who often hosted gatherings of learned men at his house, where they discussed mathematics and philosophy. Maria participated in these erudite seminars, although she was shy and only engaged in them to please her father. During the intermissions between Maria Gaetana’s speeches, her sister Maria Teresa, a composer and noted harpsichordist, entertained the guests by playing her own compositions.

Maria was a child prodigy, speaking fluent Italian and French at the age of five. By age 11, Maria had also mastered Greek, Hebrew, Spanish, German, and Latin, and was nicknamed “the Seven-Tongued Orator” and “the Walking Polyglot.” At 14 she was solving challenging problems in analytic geometry and ballistics. Maria acted as a teacher for her siblings. When she was nine, she composed and delivered an hour-long Latin speech to her father’s friends, on the right of women to be educated. She often wrote solutions to thorny math problems in her sleep.

After the fall of Constantinople in 1453, many scholars migrated to Rome, creating the intellectual conditions which precipitated the Renaissance. In Italy, intelligent women were admired by men, and women freely participated in the arts, medicine, literature, and mathematics. Maria Agnesi was a sterling product of her generation.

In 1738 Pietro published a collection of Maria’s essays on natural science and philosophy entitled Propositiones Philosophicae. These were based on 190 of her theses defended during his seminars, on diverse topics including logic, ontology, mechanics, hydromechanics, elasticity, celestial mechanics and universal gravitation, chemistry, botany, zoology, and mineralogy.

Maria expressed her strong desire to enter a convent, but her father protested. Upon her mother’s death, Maria seized the opportunity to retire from public life, volunteering to manage the household for her father. She devoted her free time to the study of mathematics, under the guidance of Father Ramiro Rampinelli, an Olivetan Benedictine who later became professor of mathematics at the University of Pavia.

Maria started writing a mathematics textbook for her siblings, which developed into her most important work, Instituzioni Analitiche (Analytical Institutions), concerning differential and integral calculus. Upon publication in 1748, Maria’s book (dedicated to Empress Maria Theresa of Austria) caused a sensation in academia, being a systematic collation of the works of various mathematicians, along with her own discoveries. It was one of the first and most complete works on finite and infinitesimal analysis, and was translated into several languages to be used as a textbook across Europe. Since the publication, a curve constructed by Catholic mathematicians Pierre de Fermat and Dom Guido Grandi has become known as “the Witch of Agnesi,” due to an error in translation (though it does resemble a traditional image of a witch’s hat).

Pope Benedict XIV wrote two letters to Maria. The first, dated June 1749, was a congratulatory note on the publication of her book, accompanied by a gold medal and a gold rosary. In his second letter, dated September 1750, the pope appointed her to the chair of mathematics, natural philosophy and physics at Bologna, currently the oldest university in the world. She was the second woman ever to be granted professorship at a university, physics professor Laura Maria Caterina Bassi being the first.

However, Maria shunned the public eye, and only accepted her professorship as an honorary position. After her father’s death in 1752, she withdrew from academia, choosing instead to delve into theology and social work, sacrificing her wealth for the poor of her parish. In 1771 Maria became directress of the Pio Albergo Trivulzio, a hospice for elderly women where she served the poor and sick until her death.

A crater on Venus has been named for Maria Agnesi. In 1996, asteroid 16765 was also given the name Agnesi. In 2014 a Google Doodle was produced for her 296th birthday, and this year the Family Coppola released a brandy in her honor. She may not be as famous as Pascal or Pythagoras, but Maria Agnesi is still making her mark.

To learn more about Maria Gaetana and her sister Maria Teresa, visit Carmela Martino’s site http://www.mgagnesi.com/ or check out Massimo Mazzotti’s The World of Maria Gaetana Agnesi, Mathematician of God.

[This article has been edited for clarification purposes – Ed]

Read more:
Power in the Church? Women Have Always Had It