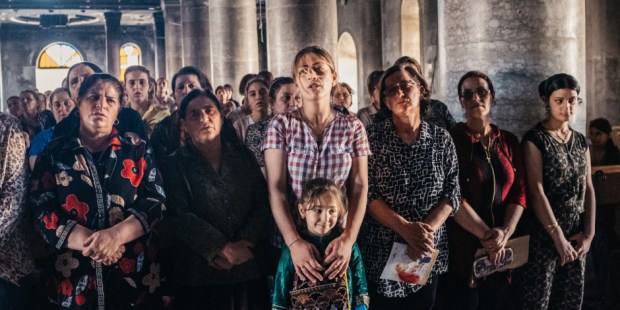 In the last three and a half years, Warda told the seminarians, well-meaning Christians have often asked him to leave Iraq, and bring his community to the West — to America, Australia and Europe.

“[They would say] ‘everyone is really helped by the presence of the Christians from Iraq because of their dedication and their commitment to the Christian faith.’ And we always said ‘No, this is our historical land,’” he said.

The effort to helping Christian families return to their homes is well underway. Thanks to a $2 million reconstruction grant from the government of Hungary, 900 Christian Chaldean families have moved back into Teleskof. Another $2 million from the Knights of Columbus, who have committed $17 million to aid Christians in the Middle East, has helped over 200 families return to the town of Karamles, with another 500 families expected to return there in the near future.

In remarks at the National Press Club on Tuesday, he formally thanked President Trump and Vice President Pence.

“It makes an important shift because it shows that the American government considers the situation of those who suffer this persecution at the hands of ISIS to be a priority,” he said.

When asked what Americans can do to show solidarity with the persecuted Christians, Warda told the seminarians to continue praying and to help materially by contributing to the Knights of Columbus, Aid to the Church in Need, and Catholic Relief Services. And thirdly, he said, to continue to raise awareness about the plight of Christians in Iraq.

“Try to use all the channels to make this issue well known and not forgotten. After three and a half years so many people tend to forget or are sometimes tired of always hearing about the persecution of the Christians so we need the voice of our brothers and sisters to remind everyone that the persecution and difficulties and challenges are still there,” he said.

On Thursday, before the archbishop returns to Iraq, he will visit the United Nations to participate in a conference on “Preserving Pluralism and Diversity in the Nineveh Region.”