Did Coca-Cola invent the look of modern-day Santa Claus? 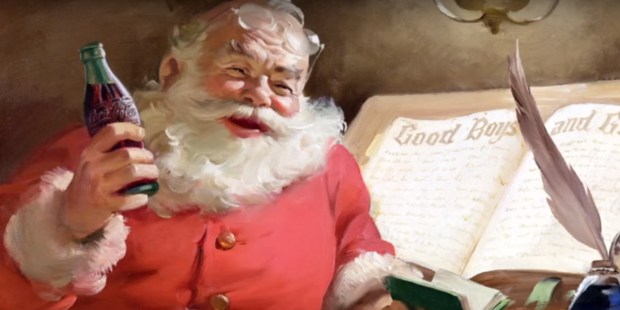 And does it compare at all to the real St. Nick?

Most of the world is familiar with the ever popular image of Santa Claus: a jolly old man with a white beard, fluffy red suit and rosy red cheeks. This image happens to correspond to yearly advertising campaigns of the Coca-Cola company ever since the 1930s. It has led many to claim that the company is solely responsible for the modern-day image of Santa Claus that has been spread around the world.

Is that true? And does that image correspond at all to the 4th-century St. Nick?

The answer is a complicated yes and no. Coca-Cola clarified the history behind image a few years ago.

In 1931 the company began placing Coca-Cola ads in popular magazines. Archie Lee, the D’Arcy Advertising Agency executive working with The Coca-Cola Company, wanted the campaign to show a wholesome Santa who was both realistic and symbolic. So Coca-Cola commissioned Michigan-born illustrator Haddon Sundblom to develop advertising images using Santa Claus — showing Santa himself, not a man dressed as Santa.

For inspiration, Sundblom turned to Clement Clark Moore’s 1822 poem “A Visit From St. Nicholas” (commonly called “‘Twas the Night Before Christmas”). Moore’s description of St. Nick led to an image of a warm, friendly, pleasantly plump and human Santa. (And even though it’s often said that Santa wears a red coat because red is the color of Coca-Cola, Santa appeared in a red coat before Sundblom painted him.)

According to Coca-Cola, while they did not entirely invent the modern-day depiction of Santa Claus, they were the principal force behind its popularization. Prior to the Coca-Cola ads, Santa Claus/St. Nicholas was seen in a variety of forms, influenced by different interpretations.

The clothing used is primarily secular in origin; however, it does have roots in Christian antiquity.

St. Nicholas was a bishop during the 4th century and at that time bishops typically adapted the common vesture of the day. It wasn’t until the 12th and 13th centuries that clergy adopted the Roman cassock as the piece of ordinary clothing that distinguished them from the laity. Bishops were distinguished from other clergy by the color of their vesture and by fur that lined their cassock at the hem, cuffs and collar.

For most of Church history green was the color for bishops. This color is still seen on the traditional coat of arms that each bishop chooses when elected. In the 16th century the color was switched to “amaranth red,” which is named so in reference to the color of the amaranth flower. In practicality it more resembles the color fuschia. This is probably one reason why Santa Claus is sometimes depicted wearing green prior to the 20th century.

Also, the pope was known for wearing a red and white camauro (a fur-trimmed velvet cap) that looks very similar to what Santa Claus now wears. Pope Benedict XVI was seen wearing similar vestments during the winter months of his pontificate.

To summarize, the primary influence of the modern depiction of Santa Claus is Moore’s ‘Twas the Night Before Christmas and the Coca-Cola company furthered that image, making it the standard image children grow up with. St. Nicholas likely didn’t wear anything similar to what he is now depicted wearing, but bishops (and popes) in the history of the Church have worn clothing that does resemble the jolly image of Santa Claus.