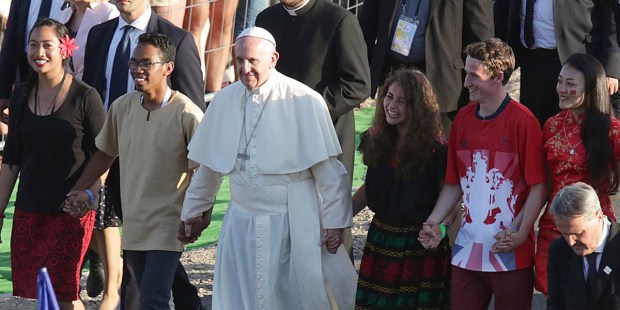 Cardinal Lorenzo Baldisseri, Secretary General of the Synod, in an exclusive interview with Aleteia

Perhaps the most important event of 2018 for the Catholic Church will be the Synod of Bishops focusing on young people: a response to the greatest challenge facing Christianity today—namely, how to pass the Gospel on to new generations.

The official theme of the synod, chosen by Pope Francis, is “Young People, Faith, and Vocational Discernment.”

A pre-synodal meeting of young people from around the world will take place March 18-24. It is an important event during which young people will meet and debate topics regarding the meaning of their existence.

The results of this event will be summarized in a document which will be given to the bishops participating in the Synod in October at the Vatican.

In order to understand better Pope Francis’ reasons for launching this unprecedented program for a summit of this kind, Aleteia met with Cardinal Lorenzo Baldisseri, the Secretary General of the Synod of Bishops.

Your Eminence, how was the subject of the upcoming Synod chosen?

Cardinal Baldisseri: This subject was chosen by the majority of those consulted, from the bishops of the Synod Assembly to the [national] episcopal conferences and cardinals. The subject of young people is the one that emerged in first place, the one with most support. It is also a continuation of the subject of the family, which we already discussed. The pope quickly accepted the subject of young people, and he recognized its urgency.

What does the pope expect from this Synod?

He expects a movement. A powerful path. A true meeting with young people—and we really want to listen to young people, to walk with them. We want to see them all: whether those within the Church, or those farther away.

What kind of Church will the young people find?

I would like even those far from the faith to see a welcoming Church that is able to offer an attractive message of hope, capable of proposing ideals.

How were the young people who will participate in the Pre-Synod chosen?

We entrusted this principally to the episcopal conferences. Approximately 300 youths will be invited. The important thing is that they be representative of their context. To this end, we are depending on the episcopal conferences, the Eastern Churches, people who work on the ground, those who are side-by-side with young people, the representatives of movements, associations, and a good number of young people who come from outside, be they Christians or adherents of other religions, and non-believers. We want to carry out a great process of discernment, and to have significant representatives from these groups, from these contexts. They will participate, they will be invited by us, and we will also cover their expenses.

The internal methodology will be almost like that of the Synod: there will be some presentations and study groups, and then at the end we want there to be a final document that can be given to the Synod Fathers. Clearly, this meeting will take place before publishing the “Instrumentum Laboris” (“working document”) and of course, [the meeting’s final document] will be taken into account. And it will all be submitted, according to our statutes, first to the Council of the secretariat, and then to the Holy Father. But, the Council of the secretariat is presided over by the pope, who comes here. He is the one who convokes us, because he is the president of the Synod. This is the only organ of the Holy See that has the pope himself as president.

You already knew the pope before he ascended the throne of St. Peter: What did you see in him?

I got to know him indirectly at Aparecida. [Cardinal Jorge] Bergoglio’s reputation in Latin America was known throughout the continent. A great Jesuit, because the Jesuits are great. He had his own idea of how to work, which naturally wasn’t shared by all. He was recognized as being very competent to draw up the final document. In fact, at Aparecida, he presided over the drafting of the final version of the document. He was the one who gave it its most important elements. I got to know him in my function as Apostolic Nuncio in Brazil.

[For more information on the Synod of Bishops on young people, visit http://www.synod2018.va]

This article is translated and adapted from Aleteia’s Italian edition.