Coming home from genocide: How to prevent ISIS from rising again 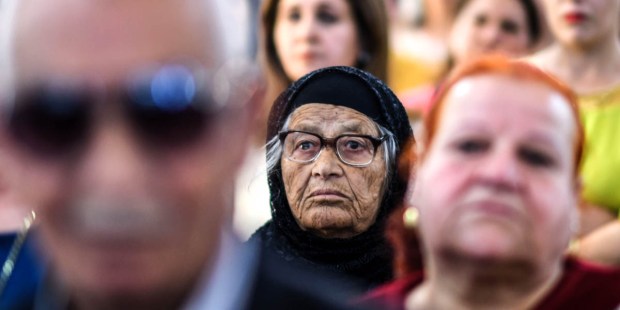 Government stability and countering ideology are key to preventing a resurgence of the Islamic State.

The Islamic State failed to establish its caliphate, and ISIS territory has been reconquered. But the Christian communities of the Middle East, one of the targets of ISIS oppression, are still vulnerable and in need of protection, experts agreed during a daylong conference in New York City this week.

And, while the established military may have defeated Islamic State fighters in Iraq and Syria, there is still a dire need to combat the underlying ideologies that gave rise to ISIS, speakers suggested.

“Coming Home from Genocide” was the catchy title for the second annual conference on preserving Christian communities in the Middle East, sponsored by the Anglosphere Society and the Center for Religious Freedom of the Hudson Institute December 5. Speakers included Retired Gen. Jack Keane, chairman of the Institute for the Study of War; Cardinal Timothy Dolan; former Congressman Frank Wolf of Virginia, and Knights of Columbus Supreme Knight Carl Anderson.

“Despite taking ISIS’s caliphate away from them, they are a thriving organization,” warned Gen. Keane, who played a key role in formulating the surge strategy in Iraq under President George W. Bush. “They’ve expanded into 30 countries. They have a virtual caliphate that they are involved in every single day to either inspire, direct or at least support others to kill their fellow citizens.”

The retired four-star Army general said that ISIS leader Abu Bakr al-Baghdadi grew his group of “several hundred” Iraqi jihadists into an organization of 30,000 fighters, many of whom came from abroad, by “modern messaging and modern cinematography” on the internet, “addressing young people, who for whatever reason are seeking purpose and direction in their lives, disenfranchised from the society they were in.”

“ISIS will continue to be a terrorist organization inside Iraq,” warned the general, an analyst at Fox News. “They will still look to kill non-believers, Christian minorities, [and other] Muslims. They will still undermine the government of Iraq.”

“The political situation in Iraq is every bit as serious a threat to the stability of Iraq and also to Christians and other minorities, because with the lack of political stability, with the lack of some kind of unity, the unrest continues,” he said. “There’s potential for civil war. You saw what just happened with the Kurds and the Iraqis, and that’s essentially political disagreement that leads to armed intervention. And guess who’s right in the middle of all that? The Christians who are trying to get back to their neighborhoods.”

Since Kurds in the north of Iraq voted in late September for independence, the semi-autonomous government of Iraqi Kurdistan has been fighting over land with the Iraqi military. Some of that fighting has seriously impacted ongoing efforts to rebuilt homes in towns on the Nineveh Plain so that Christians displaced by ISIS can return home.

Keane said that part of the need for addressing political stability is tackling the issue of Iran, which has for years striven to build a “land bridge” to the Mediterranean. As part of Iran’s strategy for dominance in the region, the Persian nation has achieved varying degrees of influence in Iraq, Syria and Lebanon. The general said that neither the Obama nor the Trump administration has been doing “a very good job in dealing with this political instability.”

“We don’t have a plan and a strategy to diminish the influence of Iran inside Iraq,” Keane contended. “Iran has greater political influence over the Iraqi government than we do. We started to disengage in 2009. Iran wants a weak Iraq that has fissures in it between the Sunnis, the Shias and the Kurds, so that they can maintain influence and control.”

But Keane, who confided that he opted out of consideration to be named U.S. secretary of defense in the current administration, does find hope in some recent moves by President Trump.

“His first international visit was to the Middle East. He stood there and called out the Iranians in front of 55 leaders of the Middle East and Northern Africa and said to them, ‘Iran is our strategic enemy, and I stand side by side with you against them,'” Keane recalled. “No president had ever said anything like that.”

Trump also acknowledged the need to undermine the ideology at the basis of groups such as ISIS, telling the gathered leaders that this is something they need to do themselves. “You need to offer an alternative to the young people who are choosing this kind of life,” Trump said, according to Keane.

Subsequently, according to the general, Mohammed bin Salman, the crown prince of Saudi Arabia, “formed an alliance with 40 other countries, and they’re pushing back against this ideology.”

“Finally, a 32-year-old leader from a country where Wahabbism … was part of the seed core for the development of radical Islam, he’s finally pushing back on that and taking the mantle of leadership. And that is actually hopeful,” Keane concluded.

Part of the problem comes from Islamic school textbooks published by the Saudi Ministry of Education, according to another speaker, Nina Shea, director of the Hudson Institute’s Center for Religious Freedom.

“Saudi Arabia has spread these textbooks far and wide around the world. They are extremely radical,” said Shea, who has met with Saudi officials to ask that they be reformed. “Since 9/11, Saudi Arabia has been promising the world that they’re going to clean up these textbooks, and it never seems to get completed,” she said, adding that the Saudis are well aware of the problem. A royal panel of experts in the early 2000s concluded that the books “leave pupils to think that the only way to deal with the religious other is by physically eliminating him,” said Shea, a former member of the U.S. Commission on International Religious Freedom. The books “talk about the need to fight and kill Christians, Jews, Shia, Bahai, endless examples of Sunni dissidents, anyone who disagrees with them. In Saudi eyes, they call Christians polytheists [because of a misunderstanding of the Trinity], saying ‘Major polytheism makes the taking of blood and wealth permissible.’”

“Crown Prince Mohammad bin Salman has made lots of promises and outlined a vision for 2030, primarily to modernize the economic sector,” Shea said. “But there are no reassurances that I have that there will be greater toleration of the religious other and different beliefs. … There won’t be real deradicalization, it won’t be easy for any minority to survive in this region, without an opening up to other ideas.”

One project already responding to the need to combat the ISIS ideology is being led by Alberto M. Fernandes, president of Middle East Broadcasting Networks, which carries out all US-funded broadcasting in Arabic.

“The building blocks of the ideology from which the Islamic State flourished are largely intact,” Fernandez, a career diplomat with the U.S. State Department, told the New York gathering. “The intellectual building blocks and the justification for the violence and the genocide are largely intact in the region. … The region is in a crisis that is not ending because of the military defeat of ISIS on the battlefield. … At MBN, what I saw we needed to do is to wage ideological war in a way that is in the interest of the values of the United States.”

He said that the media around the region are dominated by two narratives—that of individual regimes and that of Islamists. The media are saturated with a “toxic discourse about minorities, about others, about intolerance,” he said. “So the idea is to use MBN as an aggressive way to push back at that. … The message we want to send is not so much to minorities, but to Muslims, to kind of promote a different image or a different model of the Muslim world, a kind of more enlightened, a more tolerant, a more open, a less cruel view of the Muslim world, and having Muslims do that.

Said Fernandez, “What we’re trying to do is empower those more enlightened views or reformist views.”