Saints and dragons: The beauty of Scandinavian churches

The austerity and simplicity of wooden staves is enough to build what may be some of the most beautiful churches in the world.

Some of the most overwhelming buildings in the world are also the simplest. The so-called “stave churches” combine the austerity of some Christian traditions with the designs and motifs of traditional Scandinavian architecture.

A stave is simply a wooden post (generally convex) that links with another one until it forms either a complete structure, or at least the frame for it. It is, indeed, a traditional Viking construction technique (the same one used by the prodigious Scandinavian navigators to build their boats) which allows for the use of wood without further need for any nails or glue. In fact, the only material used in the construction of these churches, apart from these wooden staves, are the stones used to prop up the foundations of the building, as Eric Grundhauser notes in his article published in Atlas Obscura.

Between the 12th and 14th centuries, more than 2,000 of these churches were built throughout Europe. Today, only 28 of the original ones remain standing, all of them in Norway. 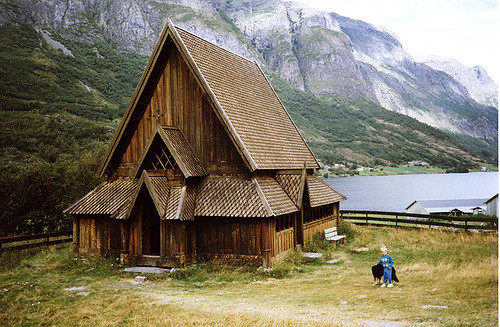