Libya and Italy reach agreement to clamp down on human smugglers 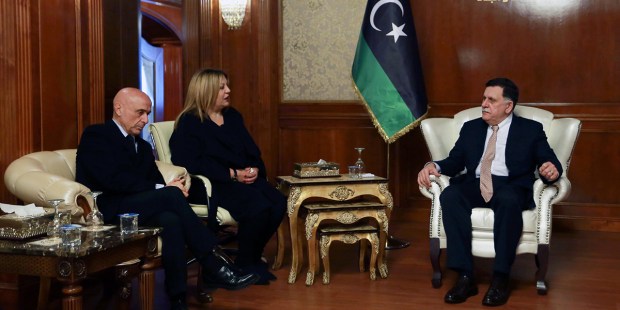 In the wake of video aired on CNN purportedly showing a slave auction in Libya, that country’s UN-backed government has agreed with Italy to establish a joint operations room for tackling migrant smugglers and traffickers. The agreement is part of efforts to curb migrant flows toward Europe, Reuters reported.

The deal to set up an operations room was announced Saturday after a meeting in Tripoli between the head of the U.N.-backed Government of National Accord (GNA), Fayez Seraj, Libyan Interior Minister Aref Khodja, and his Italian counterpart Marco Minniti, the news service said.

A statement from Seraj’s office said the center would consist of “representatives from the coastguard, the illegal migration department, the Libyan attorney general and the intelligence services, along with their Italian counterparts.”

Traffickers have apparently taken advantage of the desperation of tens of thousands of vulnerable people who risk everything to get to Libya’s coast and then across the Mediterranean into Europe. More than 600,000 people have made the perilous trip over the past four years, fleeing war, terrorism, famine and other hardships. In the past, migrant smugglers have worked with impunity in western Libya, where the Government of National Accord has little authority over armed groups that have real power on the ground, Reuters pointed out.

After reporting on grainy cell phone video of a Nigerian man on the auction block in Libya, CNN conducted its own investigation in a location outside of Tripoli. The news network said it witnessed a dozen people go “under the hammer” of the auctioneer in the space of six or seven minutes.

“Does anybody need a digger? This is a digger, a big strong man, he’ll dig,” the salesman, dressed in camouflage gear, says. “What am I bid, what am I bid?”

CNN explained that a recent clampdown by the Libyan coast guard means “fewer boats are making it out to sea, leaving the smugglers with a backlog of would-be passengers on their hands. So the smugglers become masters, the migrants and refugees become slaves.”

The network said that it handed over its own video footage of auctions to the Libyan authorities, “who have promised to launch an investigation.”