The “Hill of Crosses”: A symbol of anti-totalitarian resistance

A 19th-century tradition, renewed during the Soviet occupation, became a symbol of national identity.

The hill does not belong to anyone. Nobody claims possession of the lot, no municipality seems to be in charge of its maintenance, nor is the initiative attributed to any particular group. And yet, the Lithuanian “Hill of Crosses,” 12 kilometers north of the city of Siauliai, today a place of pilgrimage, was born, grew, remained and resisted the onslaught of more than one invasion.

Thus, crosses began to appear on the hill: one for each missing body. By then, one could already count around 3,000 crosses. And although at the beginning of the 20th century the number of crosses decreased, during the Soviet occupation the hill took on a new meaning: it became a place of religious and cultural resistance in which the Lithuanian Catholics symbolically faced the obligatory atheism of the Soviet Union.

The Moscow government did not hesitate to demolish the site. In fact, they did. Three times. And all three times, Lithuanians returned to plant their crosses. By the time the Berlin Wall fell, the hill was filled with tens of thousands of crucifixes, images, rosaries and votive offerings.

In the year 2000, seven years after the visit of the then Pope St. John Paul II, a Franciscan hermitage was built near the site, to serve the hundreds of Catholic pilgrims who visit the place today. 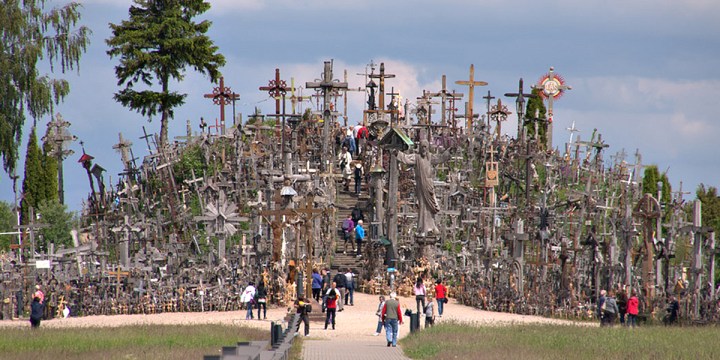