The (true) legend of India’s only Catholic Queen 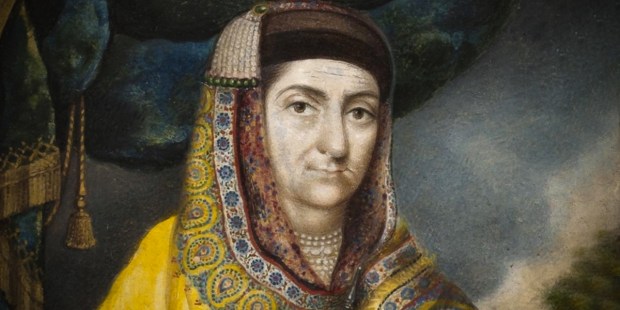 Begum Samru ruled over a vast and rich province in northern India in such a manner that even the British East India Company considered her a threat.

For many a Catholic, it might come as a pleasant surprise that there was once a Catholic queen who ruled over a vast and rich province in northern India in such a manner that even the British East India Company considered her a threat to its territorial ambitions.

But what sets her apart from all rulers, male or female, is that she is perhaps the one and only Catholic ruler of India. This is indeed a rare distinction considering that India was ruled by a plethora of Hindu, Muslim, Buddhist, Jain and even Sikh rulers but no Christian ruler. She ruled Sardhana, a small but prosperous principality near Uttar Pradesh’s Meerut in 18th- and 19th-century India.

She was born Begum Samru Farzana Zeb un-Nissa (1753) to Latif Ali Khan, a nobleman of Arabian origin, who had settled in the town of Kotana, 30 miles northwest of Meerut. When she was six years old she lost her father. In consequence of ill treatment by the elder son of her father by another wife, her mother moved with her to Delhi, and she took up dancing as a profession. She had a graceful way; and she must have been uncommonly beautiful at the age of 15, to have caught the eye of a European mercenary Walter Reinhardt Sombre, whom she later married. On 7 May 1781, aged around 40, she was baptized as Joanna Nobilis Sombre, by a Roman Catholic priest. However, she was popularly called as Begum Samru.

As an enterprising mercenary, Walter moved from Lucknow to Rohilkhand (near Bareilly), then to Agra, Deeg and Bharatpur and back to the Doab.  Walter became the Governor of Agra. He had built a powerful mercenary army. Subsequently, the Mughal emperor of India, Shah Alam, the second, allowed him to rule from the principality of Sardhana. Unfortunately, Walter did not live long and he died on May 4, 1778.

Begum Samru then buried her husband in his favourite city of Agra. She inherited his mercenary army and succeeded as the ruler of Sardhana. Samru, though small in stature, wore a turban and rode on horseback as she led her troops to battle. So invincible did she seem that her army occupied the left of the Mahratta line at the battle of Assaye and hers was the only part of the Mahratta force that was not driven in disarray from the battle field. Having annihilated an advance by the 74th Highlanders and a picket detachment commanded by a Colonel Orrock, her army then withstood a cavalry charge from the Raj before marching from the field in good order. She later inducted Jats into her irregular armies.

After the fall of Aligarh in September 1803, she was induced to surrender to British General Lord Lake and afterwards lived on good terms with the British, receiving visitors including the Bishop of Calcutta, Reginald Heber, Commander-in-Chief of the Indian Army Lord Combermere and Italian adventurer Jean-Baptiste Ventura. Her conduct in the internal management of her estate was highly commendable. Over time, she became powerful, ruling over a large area from Sardhana.

The British apprehensions were not misplaced as she played a key role in the political and military developments of the 18th and 19th century. When British General Lord Lake met the Begum in 1802, in a fit of enthusiasm he gave her a hearty kiss, which appalled her troops. But with her customary tact, Begum Samru pacified them by saying that it was only “the kiss of the father to a repentant child.”

In 1787, when the Mughal emperor of India, Shah Alam, blind and feeble, was in pursuit of Najaf Quli Khan and trying to quell the rebellion stirred up by him, an incident occurred at Gokalgarh that brought the Begum closer to Shah Alam. Seeing that the emperor’s troops were wavering in their resolve to attack the rebel leader, she advanced with a force of 100 men and whatever big guns she had and opened fire on Najaf Quli Khan and his men. This did the trick and Najaf sought the Begum’s help to make his peace with Shah Alam. Thankful for her intervention, the emperor bestowed special honours on her at the royal court and declared her to be “his most beloved daughter.”

Begum Samru’s palace in Chandni Chowk was built in a garden gifted by Akbar Shah, a later day Mughal, to the Begum when he ascended the throne after the death of Shah Alam in 1806. Her palatial building still stands in Chandni Chowk, New Delhi. It is currently owned by the State Bank of India, Chandni Chowk Branch.

Another palace complex that belonged to the Begum in Gurgaon has been completely lost to encroachments. This building is located between Gurgaon and Jharsa village, much of which was used as district collector’s residence or camp office. Built in Islamic style, the ruins of this palace survived till about 2008 in Gurgaon.

The palace built by her in Sardhana near Meerut was the centre of much activity during the reign of Mughal Emperor, Akbar Shah. Shah Alam II, the predecessor and father of Akbar Shah, regarded Begum Samru as his daughter. He did so because the Begum had saved Delhi from an invasion by a force of 30,000 Sikhs, under Baghel Singh in 1783. They had encamped at Tis Hazari (the name of the place being derived from the number of those who constituted the force, estimated at 30,000). Thanks to the Begum’s parleys, the Sikhs did not enter the city and went back to Punjab after getting a generous monetary gift from Shah Alam.

She also built what is now known as the Basilica of Our Lady of Graces. Before being created a Basilica, the church which she built became a Cathedral for a short time, with its own Bishop. In the church is a letter the Begum is known to have written to Pope Gregory XVI: “I am proud to say it (the church) is acknowledged to be the finest, without exception, in India. The exquisite semi-precious stone work, life-like statues, verandah of 18 Greek columns, elevated altar with stained glass inner dome, two spires and three Roman domes, all add to its grandeur.” She wanted it to be similar to the grand churches of Rome and employed an Italian architect, Anthony Reghelini, who took 11 years to complete it. An 18-ft high edifice on the left of the sanctuary was carved by Italian sculptor Adamo Tadolini and sent by ship from Italy to Kolkata, transported on boats up the Ganga and to the church on bullock carts. During March and November thousands of people turn up to bless the Begum and pray to the Virgin Mary.

The Begum’s palaces have been converted into schools, college and hostels. At Sardhana, she patronized artists and poets, and was fond of gifting lifelike portraits of herself to people. Her minister, Diwan Rae Singh, was an ancestor of Jawaharlal Nehru. She had been gifted a beautiful residence in Chandni Chowk just opposite the fort by the Mughal emperor, which is now Bhagirath Palace, one of the largest wholesale markets for electrical and electronics goods in the country!

Begum Samru died on January 27, 1836, at the age of 90 and was buried under the Basilica of Our Lady of Graces. Her inheritance was so huge and so enormous that it is still being disputed today, almost two centuries after her death.

This story has been kindly granted to Aleteia by our partners in India, Indian Catholic Matters. We encourage you to visit their full website, here.