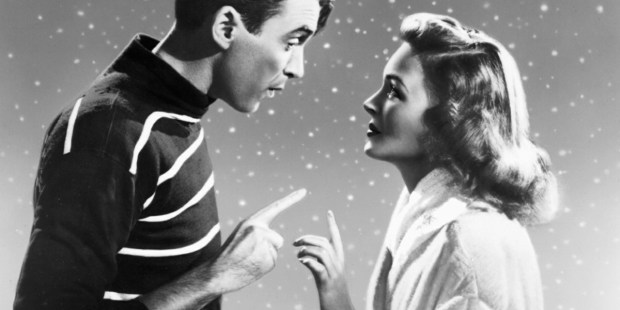 When I was a young girl, I stumbled across a black and white Christmas movie on television. It spoke to me of faithful living, redemption, and the power of prayer. Eventually, I bought the movie to share with my parents and siblings, and a new family tradition in our home was born: watching Frank Capra’s It’s a Wonderful Life each December. Now, as a mother, I’ve introduced it to my own kids. How can a movie that came out 71 years ago this month still speak to my family and yours? Below, six reasons why I still watch It’s a Wonderful Life every year.

1. It shows that every person matters

Until Clarence the angel shows him, George Bailey doesn’t know how many people he has impacted as he lives out his simple life in his hometown. Saving his brother’s life as a child ends up preventing hundreds of deaths during the war. A small, kind deed done for Violet, a young woman heading down the wrong path, changes the direction of her life for the better. George’s quiet and steady loyalty ripples out in ways he couldn’t have imagined. This shows our children that while we may never know the impact we have on others, what we do and how we treat them does have lasting impact. It shows our children that their lives have purpose, even when that purpose is is not obvious

2. It strengthens our empathy muscles

I’d become convinced that my tween daughter didn’t have much compassion for her fellow human beings. It didn’t help that the only time she seemed to show concern about someone in the movies was if it was an animal! But year after year, when she sees Uncle Billy lose the money the Building and Loan needs to survive, and old Mr. Gower crying in distress, she hurts for them. And, rather than seeming dated, the issues they face feel current and relatable: struggling to support a family, dealing with a bully, immigrants striving for dignity and a safe place to live, grief, and interrupted dreams. These may be black and white images on a screen (or color if you like the colorized version!) but over time, the characters have become real people to us, and we empathize with them and their struggles.

3. It illustrates the power of community

The small loans and kindnesses George shows his customers during the Great Depression don’t seem like much, but they keep his neighbors afloat financially. Likewise, at the end of the movie when the community comes together to pray for George and offer their sometimes meager financial contributions to keep him out of jail, you can see how even small gestures can have a big impact. George Bailey felt desperate and believed he was alone, but his community showed him otherwise. Our kids may not think they can do much to help a big world full of big problems, but they can lighten the load in small ways in their own schools, churches, and communities by noticing when a friend is sad, giving what they can, and turning toward, rather than away from, families in crisis.

4. It shows that God hears our cries for help

George Bailey thinks his life is beyond redemption and repair. He feels like a failure. In despair, he calls out to God: “God … God … dear Father in heaven, I’m not a praying man, but if you’re up there and you can hear me, show me the way. I’m at the end of my rope. Show me the way, God …” He wants to end his life, but God sends a hapless angel, Clarence, to his aid. God knows George well enough to know that his heart is so big that even in his own despair, he’ll try to help someone else — in this case keeping Clarence the angel from drowning. God heard George’s prayer. God knew George well enough to know exactly how to reach him in a personal way.

In filming the prayer scene, actor Jimmy Stewart told interviewer Richard H. Schneider that he was overwhelmed and the tears he shed were his own, not an act. “As I said those words, I felt the loneliness, the hopelessness of people who had nowhere to turn, and my eyes filled with tears. I broke down sobbing,” Stewart once said. “This was not planned at all, but the power of that prayer, the realization that our Father in heaven is there to help the hopeless, had reduced me to tears.”

We can share with our kids that they are never outside God’s reach and redemption and that no one goes unheard or unknown by God.

So much of what our kids watch is loud and fast and brash. Snapchat videos last seconds, and sometimes our attention spans don’t seem much longer than that. At two hours and 15 minutes, It’s a Wonderful Life is a long movie. It unfolds over decades, and is character driven rather than action driven. Of course, not every wiggly little one will be able to sit through all of it, but by offering it up every year, with plenty of popcorn and cocoa, we can introduce our kids to putting in the time to get to know the characters and investing in the messages of the movie. To this day, It’s a Wonderful Life is the only “old” movie I can get my family to watch, but I’m glad they find it as worthwhile as I do.

6. It proves outside appearances are sometimes wrong

George Bailey’s drafty old house could use some work, and his career never took off the way he wanted, but at the end of the film he is proclaimed “The richest man in town!” Kids will see that the trappings of what the world deems successful are not always in line with reality. They will recognize that Mr. Potter, with all his money and power, is dissatisfied and alone, while George Bailey has a wealth of love and support in his life.

The movie itself illustrates this by extension. When it was released in 1946, it lost hundreds of thousands of dollars at the box office and won no awards, passed over for an Oscar by a film called The Best Years of Our Lives. But 70 years later, It’s a Wonderful Life is still watched and loved by millions. What once seemed like a commercial failure is now a Hollywood phenomenon.

My children, and perhaps yours, may not think their lives are all that wonderful based on what the world might tell them, and by the “stuff” they wish they had, but this movie teaches that what is most important are faith, family, and friends. As Jimmy Stewart told Schneider, 40 years after the movie was made, the message responsible for its late-found success: “It’s simply about an ordinary man who discovers that living each ordinary day honorably, with faith in God and a selfless concern for others, can make for a truly wonderful life.”

I think that’s worth revisiting at least once a year!