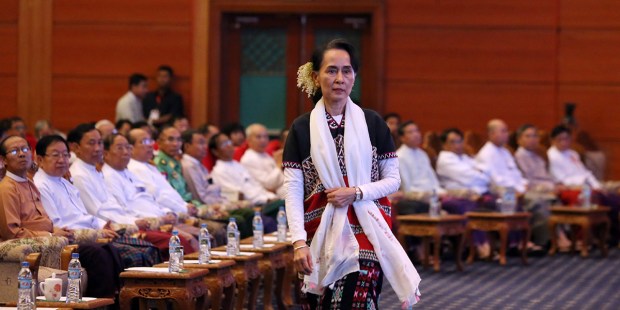 The head of the UN’s watchdog for human rights said it’s possible that Myanmar’s civilian leader, Aung San Suu Kyi, could face charges of genocide, along with the head of the country’s armed forces, Gen. Aung Min Hlaing.

Zeid Ra’ad Al Hussein, the UN official, has called for an investigation as to whether the horrors committed against the Rohingya in Myanmar constitute genocide. To make such a ruling, an international court would have to determine that actions committed against the Muslim ethnic group, who are mainly from northern Rakhine area if Myanmar, were committed with intent to destroy the group, according to the terms of the UN genocide convention.

By the beginning of December, nearly 650,000 Rohingya – around two thirds of the entire population – had fled Myanmar after a wave of attacks led by the army that began in late August, said the BBC Monday. Hundreds of villages were burned and thousands are reported to have been killed.

“There is evidence of terrible atrocities being committed: massacres, murders and mass rapes – as I heard myself when I was in the refugee camps as this crisis began,” BBC South Asia correspondent Justin Rowlatt said.

No one is suggesting that Aung San Suu Kyi is behind the attacks. But Hussein suggests that the Nobel Peace Prize laureate might be just as guilty for what she has not done.

“What clearly rankles the UN human rights chief is that he had urged Ms. Suu Kyi, the de facto leader of Myanmar, to take action to protect the Rohingya six months before the explosion of violence in August,” Rowlatt reported. “He said he spoke to her on the telephone when his office published a report in February documenting appalling atrocities committed during an episode of violence that began in October 2016.”

To be fair, Suu Kyi’s power over the Myanmar military is limited, but Hussein believes she should have done more to try and stop the military campaign, Rowlatt went on. He criticized her for failing to use the term “Rohingya,” for example.

“To strip their name from them is dehumanizing to the point where you begin to believe that anything is possible,” he said.

Neither Suu Kyi nor the head of the Myanmar armed forces responded to a BBC request for comment.

Hussein now worries about a backlash, suggesting that jihadi groups could form in the huge refugee camps in Bangladesh and launch attacks in Myanmar, perhaps even targeting Buddhist temples. The result could be what he called a “confessional confrontation” between Buddhists and Muslims, Rowlatt said.

Pope Francis met with Suu Kyi on his pastoral visit to Myanmar at the end of November, and during an airborne press conference on his way back to Rome, he was asked about criticism of her. He said that it’s hard to evaluate a criticism without asking what could realistically be expected.

“The situation of Myanmar, is one of political growth, in transition, that has many cultural historical values, but is in transition,” the Pope said. “Possibilities must also be evaluated in this optic.”