9 Christmas food traditions from around the world 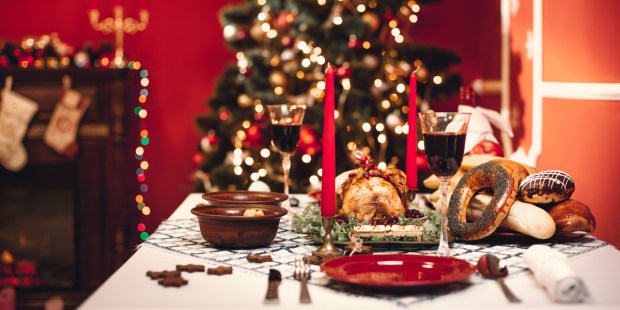 Consider what families in other countries serve and eat to celebrate the birth of Jesus Christ.

With less than a week to go until Christmas, you might be dashing around looking for the perfect ham or turkey for your celebratory meal. But have you ever thought about what other families might be preparing for the the big day in other places? We looked to different countries to discover their food traditions and found some surprising Christmas menus. One thing we did note is that they all have something in common: gathering together with family to celebrate Christ’s birth. So take a look below and see if any of these dishes can’t tempt you to change your Christmas meal plan.

Looking to the home of gastronomy, the celebrations in France start seriously on Christmas Eve, after Midnight Mass. With seafood being the popular option, most French homes will be eating salmon or oysters, with a helping of lobsters and crab. This fare continues with the popular foie gras, a controversial pate-style dish. Then some people add scallops, or Coquilles Saint Jacques, to the menu.

Moving on to the more substantial part of the meal, the French look to poultry, usually stuffed with chestnuts, and other fowl, such as pheasant. There’s no strict rule and the choice often depends on the region. Next up is the cheese course (obviously served with the appropriate wine), and then a dessert. If you’re in Provence you might have the choice of 13 desserts, mostly containing dried fruits, to represent Jesus and the 12 Apostles. Otherwise the popular Yule log is a must-have to finish off the day’s festivities.

Like the French, Brazilians also start celebrations on Christmas Eve, continuing long into Christmas morning. The family often gathers together to eat a chester, which is a large chicken with more meat, as well as some salted-cod known as bacalhau. Due to the hot temperatures, Brazilians don’t opt for a gravy dinner but cold side dishes including salads, fruits, nuts, and bowls of rice. Dessert consists of the popular dried-fruit sweet bread, panettone, or rabanadas, a type of French toast. However, if you’re in the south of the country you may get a helping of strudel, thanks to the German influence. Of course a few exotic fruits will also grace the table for a bit of light refreshment.

Not for the faint of heart, this delicacy from Greenland is quite a tough dish to tackle. The strips of whale blubber, called Mattak, are served up by the menfolk to the women. The dish is mostly eaten raw and thanks to the tough whale skin attached, it is pretty difficult to chew. Tempted? The dish does have a nutty taste and is full of vitamins C and D; unfortunately it has also been found to be a carcinogenic. The dish is followed by Kiviak that is made from baby auks, wrapped in seal skins, which are then buried for several months. It is only ready once the auks have started to rot.

Christmas presents are exchanged on Christmas Eve in this chilly northern country. To help make the celebrations special, Norwegians serve rice porridge. If you’re lucky enough to come across an almond in your helping, then you’ll be offered a pink or white marzipan pig. The main meal is often roasted pork ribs, or dried mutton ribs, accompanied by some surkal — a red or white cabbage cooked with vinegar and caraway seeds — finished off with potatoes. Breakfast on Christmas day is also important for Norwegians. Families spend many hours at the table eating the Christmas Eve leftovers along with smoked salmon and scrambled eggs.

As in so many European countries, the Christmas Eve dinner, or Wigilia, is very important to the Polish. There are many traditions to this special occasion, including setting an extra place at the table for the Lord, or a “lost wanderer” who may be in need of shelter. Although the 24th starts as a day of fasting, it ends in feasting. The meal begins with the breaking of a wafer, opłatek, which is shared by everybody at the table to represent their unity with Christ. In some houses, 12 meatless dishes (as a way of fasting) follow, representing the 12 Apostles. Then the marathon meal starts with a beetroot soup and is followed by different vegetarian dumplings, carp, beans, herrings, and sauerkraut, served with bread. In order to have a prosperous year ahead, you’ll need to have a bite from every course so make sure to leave room for  dessert! Depending on the region, you’ll enjoy a sweet dish full of dried fruits, seeds, and gingerbread. After all this eating, it’s time for Midnight Mass.

You might be surprised to see the Brits on this list, but there is a difference in what gets laid out on the typical English table at Christmas time. First, most English homes start with a breakfast of scrambled eggs and salmon to keep everybody going until they eat dinner around 2 p.m., in time to watch the Queen’s Speech at 3 p.m. The usual meal will involve a huge turkey, roast potatoes, stuffing, and a mixture of vegetables — including the oft-dreaded Brussels sprout —  served with gravy, cranberry sauce, and the much-loved pigs in blankets (small sausages wrapped in strips of bacon), or bacon-wrapped dates known as devils on horseback. If you’re not a dried fruit lover then dessert might be tricky … the Brits love their mince pies (made from dried fruits, spices, and pastries) and Christmas pudding, involving more dried fruits and brandy that can be made months in advance. There’s also the Christmas cake, which is also made from dried fruits and covered in marzipan and icing. Thankfully, the lovely chocolate Yule log has become popular over the years as another option.

Like the Polish, the Italians fast on Christmas Eve, abstaining from meat and opting for lean dishes to help purify the body. A lot of the meals depend on the region, but fish dishes, including octopus and shell fish, are generally served throughout the country. Naturally pasta has a part to play and comes accompanied with different cheeses and and vegetables. Different families offer a different number of courses — each with a theological explanation: 7 for the sacraments, 9 for the Trinity squared, 12 for the apostles, 13 for the apostles and Jesus, or… loosen your belts … 21 for the 7 sacraments times the Trinity! Moving on to Christmas Day, expect more pasta, first in a broth form, brodo. You may get pasta filled with pumpkin, or tortellini in eel broth — depending on your region. Then, after a typical stuffed turkey it’s time for dessert. Here you can expect a panettone, or cookies in the shape of a horse, fingers of the apostles, or omelettes filled with chocolate or coffee ricotta. The great news is you won’t have to clear up straight away as the tables are not cleared in case the Madonna or baby Jesus come for a taste!

Some Germans fast on Christmas Eve, choosing fish options such as herring, salmon or carp before going to Mass, depending on the region. Increasingly popular for the Christmas meal is poultry such as goose or turkey, served with dumplings, sauerkraut, a spiced kale stew, chestnut stuffing, and apple sausage. But a Christmas meal in Germany wouldn’t be complete without an assortment of desserts including Christmas cookies, Weihnachtsplätzchen, first made in Franconian monasteries back in the Middle Ages. Stollen, the equivalent of a spiced fruit loaf, is another popular dessert; it is “swaddled” in white sugar to represent the Christ Child. And of course, let’s not forget the stunning gingerbread homes that are baked during this festive season that look too beautiful to eat!

The Filipinos seem to have created a Christmas menu from the best of all these countries, adding their own very sweet touch. As Christmas is a very festive time for the country that spans roughly 7,641 islands, families gather together on December 24 for a Noche Buena (Christmas Eve dinner). Surprisingly you’ll find that pasta is a staple on the Christmas table, along with a sweet ham glazed in syrup, or a Lechon, a very tasty whole-roasted pig. Rice is also present in the form of Lumpiang Ubod, a kind of coconut based spring roll with lettuce, carrots and ground pork. Fruit salad makes an appearance, too, covered in sweet condensed milk. Even the spaghetti has a sweet addition in the form of heavy sugary sauce. The centerpiece involves a red waxed round of cheese, similar to the Dutch Edam. And cheese turns up again in the sweet Bibingka, a baked rice cake with cheese, salt, egg, butter, grated coconut, and a helping of sugar. Add a Leche flan, otherwise known as a caramel custard and you’re nearly finished. Finally, the most popular purple-colored rice cake, Puto Bumbong, is so delicious that people gather outside church after Simbang Gabi (a devotional nine-day series of Masses) just to have a taste.

Read more:
These 5 countries have the best Christmas Eve traditions