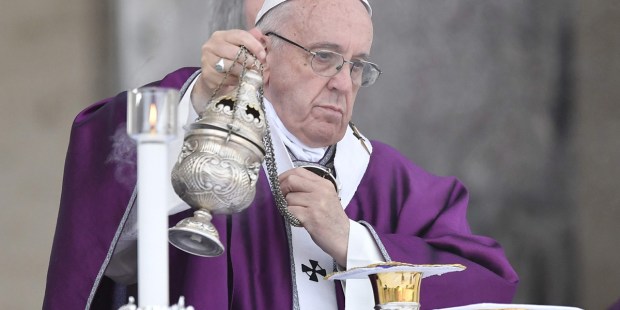 Arrive with time to prepare your hearts for this celebration, aware of the value of what is to happen.

“I recommend that, please, teach your children to make the Sign of the Cross well,” Pope Francis said today during the general audience, continuing his catechesis series on the Mass.

For this Wednesday’s audience, the pope focused on the introductory rites of the Mass.

He asked the faithful to make sure to arrive on time.

“It is not a good habit to check your watch, say, ‘I’m on time,’ and arrive after the sermon and ‘fulfill the obligation.’” Instead, the pope said, we should be aware of the value of the Mass, instituted by Christ at the Last Supper.

“It’s good to not arrive at the last minute, so as to prepare the heart for this rite, for this celebration of the community,” he said.

The Holy Father has previously spoken about the importance of Sunday Mass, defending Sunday as a day or rest, so as to dedicate time to God and to the family. In a previous catechesis, he also chided the faithful who use cell phones during Mass, recalling, “It’s not a show!”

In today’s catechesis, he explained how the Mass is “one single act composed of two parts: the Liturgy of the Word and the Liturgy of the Eucharist.” He then went on to explain the introductory rites that precede these two moments.

“The priest, at the beginning of the celebration, walks toward the sanctuary as the opening hymn is sung. Upon arriving, he bows before the altar in a sign of veneration, he kisses it and incenses it.”

He continued, “The priest who is presiding makes the Sign of the Cross over his chest, and together with him, all those present make it. This sign reminds us that every liturgical act is made in the name of the Father and of the Son and of the Holy Spirit.”

In this context, he exhorted parents to teach their children about this sign.

Then the priest “addresses the assembly with a greeting like this: ‘The Lord be with you,’ and the people respond, ‘and with your spirit.’ This greeting and response manifest the mystery of the Church gathered together, which confesses the same faith and desire to be united with the Lord.”

The pope then noted how the priest invites the faithful to make the penitential act, “which is not just to think of the sins we’ve committed, but to confess that we are sinners before God and before our brothers and sisters, so that we can rise up to a new life with Christ.”

“All of us are sinners,” the pope said, then added jokingly, “Well maybe one or another of you isn’t a sinner. If someone here isn’t a sinner, please raise your hand. … No one raised his hand! So then your faith is fine,” he said.

This means, he explained, that we shouldn’t think only of our sins, but much more it is “an invitation to confess yourself a sinner before God and your brothers and sinners, with humility and sincerity, like the publican in the temple.”

At the end of the audience, the pope offered good wishes for the upcoming celebration of the birth of Our Lord, encouraging the faithful to live these days “with intensity, participating in Holy Mass, and experiencing the grace of a personal encounter with Christ.”

Jesus wanted to “be born of a woman, of Mary, to save us and to fill us with peace and joy,” he said.

Performers from the Circus of Cuba were there to honor the pope for his birthday. Francis turned 81 on December 17. At the end of their performance they sang “Happy Birthday.”