The Church of the Nativity, the birthplace of Jesus 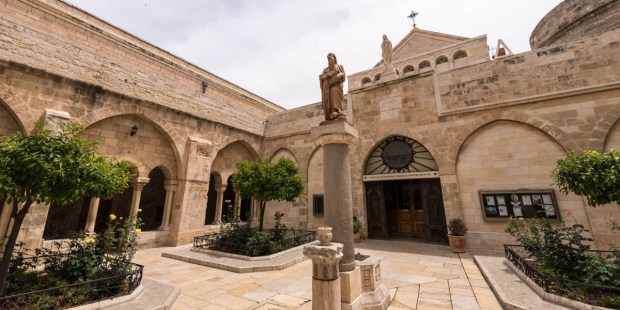 The basilica was built over the Bethlehem cave where the Christ child was born.

A visit to the Holy Land would not be complete without a stop at one of Christianity’s holiest sites – the Church of the Nativity in Bethlehem. Commissioned in 327 by the first Christian Roman Emperor, Constantine, and his mother Helena, the church was built over the cave, known as the Grotto, where the Virgin Mary gave birth to Jesus.

The authenticity of the site is based on Christian apologist Justin Martyr’s (100-165) writing, in which he notes that the Holy Family sought refuge in a cave outside of Bethlehem:

But when the Child was born in Bethlehem, since Joseph could not find a lodging in that village, he took up his quarters in a certain cave near the village; and while they were there Mary brought forth the Christ and placed Him in a manger, and here the Magi who came from Arabia found Him. (Chapter LXXVIII).

In Bethlehem the cave is pointed out where He was born, and the manger in the cave where He was wrapped in swaddling clothes. And the rumor is in those places, and among foreigners of the Faith, that indeed Jesus was born in this cave who is worshipped and reverenced by the Christians. (Contra Celsum, book I, chapter LI).

The oldest complete and continually operated church in the world, the basilica has outlasted war, rebellion, and renovations over the centuries. The original church built in 330 by Constantine was destroyed, probably during a Samaritan rebellion in 529. Byzantine Emperor Justinian rebuilt the current, much larger building that stands today. When Persian soldiers invaded Bethlehem in 614 with the intention of destroying all of its churches, it is said that they left the Church of the Nativity unscathed when they saw a mosaic depicting the Magi in Persian garb.

Under later caliphates, however, Christians faced persecution and many Holy Land sites were destroyed. The Church of the Nativity was spared once again, possibly because of its significance as the birthplace of Christ, whom Muslims consider an important prophet, and the fact that there was a mosque located within the church.

A highlight of a tour of the church is a visit to the Grotto of the Nativity. Pilgrims form a line to touch a star inscribed with the words “Hic de Virgine Maria Iesus Christus natus est” which marks the spot of where Jesus was born.

[Image courtesy of Flasherpacker Guide. Check them out here!

Jointly administered by the Roman Catholic, Greek Orthodox, Armenian Apostolic and Syriac orthodox churches, the Church of Nativity was declared an endangered World Heritage Site by UNESCO in 2012, and has been undergoing a major renovation since 2013.

During the restoration, workers discovered a 1,700-year-old mosaic of an angel that had been hidden underneath plasterwork. While work is not expected to be completed until 2020, pilgrims continue to visit the sacred site.