“Xmas” is the Mass of Christ 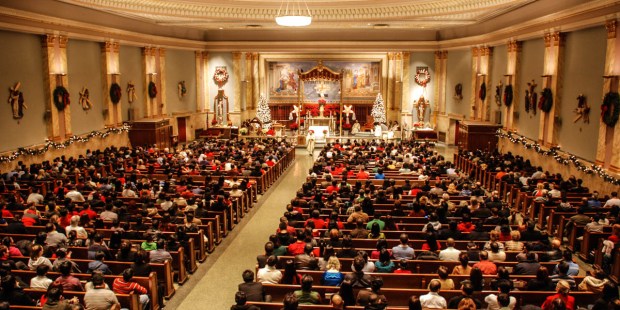 On December 25, Christmas will just be getting started! Let yourself experience the fullness of the holidays (holy days).

Some Christians are concerned that the contraction “Xmas” erases Christ from Christmas. In fact, “X” comes from the Greek letter chi for Christ, being Χριστος (Christos). According to the Online Etymology Dictionary,  Xres mæsse for “Christmas” appears in the Anglo-Saxon Chronicle (c. 1100), and X’temmas was recorded as a common abbreviation in 1551.

“The word for Christmas in late Old English is Cristes Maesse, the Mass of Christ, first found in 1038, and Cristes-messe, in 1131. In Dutch it is Kerstmis, in Latin Dies Natalis, whence comes the French Noël, and Italian Il natale; in German Weihnachtsfest, from the preceeding sacred vigil.” (Weihnacht = Hallowed/Holy Night)

Another thing to be concerned about is how the celebration of Christmas has crept backward into Advent, and when the Christmas season is really here, people stop celebrating after only the first day!

Sixty years of advertising broke two millenia of Christian practice. Halloween has now become the closest thing we have to an Advent season. Advent is now a four-week long Christmas season, and Christmas season is now Purgatory.
—Steve Kellmeyer, “Nailing Christ to the Cross”

Christmastide used to run for 40 days, from December 25 to Candlemas on February 2. Although after Vatican II, Christmas only runs to the Feast of the Baptism of the Lord, which falls on the Sunday after Epiphany (the Twelve Days of Christmas really run from Christmas Day to Twelfth Night, the vigil of the Epiphany – not during the last weeks of Advent, when we should be concentrating on the O Antiphons), we should appreciate the entire season of Christmas as a liturgical gift from the Church. It is the paramount time to contemplate the incarnation of God and what it means for humanity’s salvation from sin and death.

We ought to consider especially the Octave of Christmas, ending on New Year’s Day. Monsignor Charles Pope explains:

Most people think that Christmas Day is one day called December 25th. That is not accurate. It is the Catholic practice that we celebrate the “Octave” of Christmas. (We do the same thing with Easter). So important is this feast that we celebrate it for eight whole days (Dec 25,26,27,28,29,30,31, Jan 1). But the “Octave” is really considered one long day. Upon the completion of this long day, on January 1 the Birth”day” of Christ is complete and our calendars advance to the next year.

The tradition of celebrating an octave comes from the Old Testament, where Jews spent eight days celebrating feasts like the Passover and the feast of Tabernacles (Sukkot). As Chris Stefanick says:

So, be sure to revel in the full celebration of the Nativity of Our Lord, and don’t sell yourself short like the secular world does! The holy paradox of Eternity stepping into Time to offer the gift of eternal salvation to mankind, a sharing in the life and love of God – that surely merits prolonged reflection and prayer, culminating in the Solemnity of Mary, Mother of God on the Octave Day of Christmas.