What does St. John the Evangelist have to do with wine and snakes? 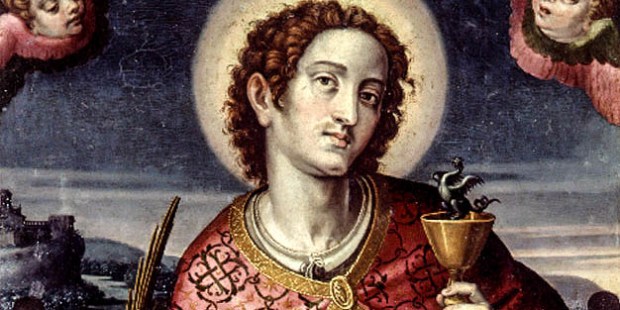 An image that presents the Evangelist holding a chalice from which a snake emerges condenses a little-known story of the saint.

Generally, John the Evangelist is seen accompanied by an eagle. The eagle, as is well known, is an animal with wide field of vision, which allows it to see for long distances. Thus, he has been associated with the vision of the Apocalypse (literally, “Revelation”) that the saint had on the Greek island of Patmos where, according to St. Irenaeus of Lyon, the evangelist wrote the Book of Revelation.

He is also represented, more commonly, seated while writing, or surrounded by some of his disciples (the so-called “Iohannine School”), dictating some of his letters, or perhaps the Gospel.

But there is a less common iconographic model, in which the saint appears holding a chalice with his right hand, from which a green snake emerges, while bringing his left hand to his chest.

The image is related to a certain memorial of the day of St. John the Evangelist, which is celebrated on December 27. Until well into the 20th century, it was a tradition to bring bottles of wine or cider that day to Mass, which would then be blessed.

Thus, every time a bottle of wine or cider was opened in the house, a little of that wine blessed at the feast of St. John the Evangelist was to be poured into the new bottle.

In some regions, this wine (which is nicknamed “Saint John’s Love”) is given to the bride and groom when they get married, or it is administered to those who are going to die, as a sacramental.

The tradition comes from a story associated with the biography of the saint: it is said that, while in Ephesus, John was offered a glass of poisoned wine. Before drinking, he blessed the drink and the poison came out of the cup in the form of a small green snake.