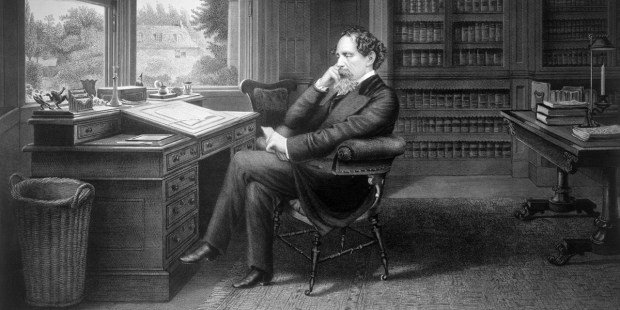 This is not the “spirit” of Christmas past.

Considered by many as the greatest novelist of the Victorian era, the works of Charles Dickens have never gone out of print. Praised by most of his contemporaries (although William James would call him “the greatest of superficial novelists,” God only knows if in fact praising or mocking him), his social caricatures would often contrast with the intricate sentimental portraits of his main characters, as in both A Christmas Carol and The Old Curiosity Shop.

But Dickens did not only write novels, short stories or even journalistic articles. His work also included, as evidenced in a letter he sent his friend Amellia Filloneau, his own (powerful) recipe for holiday punch. OpenCulture found the original text:

Peel into a very strong common basin (which may be broken, in case of accident, without damage to the owner’s peace or pocket) the rinds of three lemons, cut very thin, and with as little as possible of the white coating between the peel and the fruit, attached. Add a double-handfull of lump sugar (good measure), a pint of good old rum, and a large wine-glass full of brandy — if it not be a large claret-glass, say two. Set this on fire, by filling a warm silver spoon with the spirit, lighting the contents at a wax taper, and pouring them gently in. Let it burn for three or four minutes at least, stirring it from time to Time. Then extinguish it by covering the basin with a tray, which will immediately put out the flame. Then squeeze in the juice of the three lemons, and add a quart of boiling water. Stir the whole well, cover it up for five minutes, and stir again.

If you would rather leave the Dickensian prose aside and prepare your punch for New Year’s Eve following the standard recipe format, you can click on this link, courtesy of PunchDrink.com.