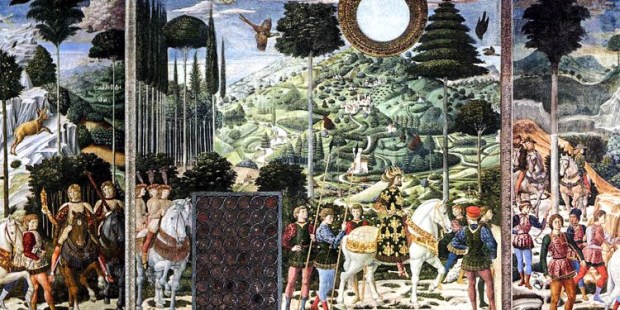 Immortality is what mortals often seek. Benozzo Gozzoli’s “Procession of the Magi” gave the Medici exactly that.

Michelangelo, Leonardo Da Vinci, Galileo, Fra Angelico, Gozzoli and Botticelli: all these master artists had a single thing in common. They were linked to one great powerful family: the Medici. The Medici were the Masters of Florence and the Godfathers of the Renaissance. Theirs is a story of political schemes, power hungry individuals, passion, betrayal, murder and art. They didn’t just collect art works; they patronized and protected it, unleashing its true nature that changed the world.

Through today’s painting we will explore how the Medici made their way into the Christmas story through the grandeur of a single canvas: “The Procession of the Magi” by Benozzo Gozzoli (1459).

Renaissance Florence cherished its beloved processions. The dazzling lavishness and prodigious publicity was considered a perfect getaway from the everyday hassles of life. These processions were organized by guilds. One such guild was the Compagnia de’Magi (The Company of Magi), who organized a spectacular yearly march through the streets of Florence on the feast of the Epiphany.

Now the Medici were the members of the Compagnia de’ Magi. Gozzoli therefore took inspiration from this parade in order to conceive a decorative scheme for the Medici private chapel. Thus begins the grand procession as Gozzoli lets the magnificent Medici wind their way through the three walls of the chapel. It is a dramatic display, not a spiritual pilgrimage!

The Wise Men, as seen in the painting, are accompanied by a huge entourage of men, women, children and animals. They are brilliantly dressed with not a speck of desert dirt on them. They are guided not by a star but by their august ambition. They seem to be journeying not to a poor Palestinian village but to a thriving city. Let’s join the procession as we minutely digest the details and experience the grandeur.

We begin by paying our respect to the members of the Medici family. They ride in the foreground at our left. This group is led by the young Lorenzo il Magnificio on a white horse. He is backed by his father Piero de Medici and his grandfather Cosimo de Medici (the family founder). Accompanying them are the Lords of Rimini and Milan, guests of the Medici in Florence. Tagging along are also the illustrious Florentines, humanists, members of the art guilds and the painter himself! Gozzoli can be recognized by the scroll on his red hat that reads Opus Benotti.

As observed in the background, the procession has begun from a fortified structure signifying the palace of King Herod, who had instructed the wise men to search for the Christ Child. However it literally pictures Cafaggiolo, the seat of the Medici, built in 1451 in the style of a medieval castle.

Right before this retinue rides the youngest king, evidently a Medici. This is confirmed by the seven golden spheres of the Medici coat of arms on the horse’s bridle. Ahead of him is the second bearded king, seated on a white horse. Now this figure bears adherence to the Byzantine Emperor John VIII Palaiologos. He is crowned with the traditional Eastern tiara resting on peacock plumes. The three girls next to him have been identified as the daughters of Piero de Medici.

As the procession meanders from cliff to gorge, from wood to field, we approach the first King. A wise man, he gazes calmly at the viewer. He is considered to be the Patriarch of Constantinople. His long grey beard is indicative of his Eastern origin and not that of the Florentines, who sport a smoothly shaved demeanor. The depiction refers to the Council of Ferrara – Florence (1439) in which the Emperor participated.

It is indeed a fairy tale spectacle: garments set in pearls and gold threads, satin and silk, brocade materials, gem studded belts and bridles. Even the young pages and the attendants on foot are dressed in Florentine costumes of imperial elegance. Elevating the noble character of the painting are the exotic members of the natural world. Gozzoli misses no opportunity to depict them: deers and does, buffaloes, eagles, monkeys, camels, preying falcon, devoured hare, water birds, fowl in flight, hunting dogs, leashed felids, chasing cheetahs and riding leopards. It is a poetic scene to behold!

Immortality is what mortals often seek. Benozzo Gozzoli’s “Procession of the Magi” gave the Medici exactly that. It immortalized their legacy in Florence, Italy and the world. It was a tactic to take people’s minds off the state, drawing them to partake in the glorious and scandalous affair of art. It canonized a link between the Medici and the Magi. It presented a presumptuous portrayal of piety, power and pride!

Joynel Fernandes is the Assistant Director of the Archdiocesan Heritage Museum, Mumbai, India. She is currently pursuing her Masters in History. Researching on Church History and Church art is her passion. She hopes to make its understanding more approachable to younger generations.

This article has been kindly granted to Aleteia by our partners in India, Indian Catholic Matters. We encourage you to visit their full website, here.